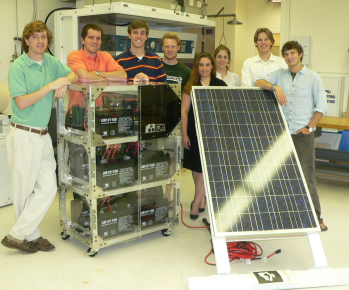 Senior projects focus on the synthesis and application of the basic science, mathematics, engineering and design skills taught in earlier courses. It also provides the students with the opportunity to exercise and apply the more advanced material taught in the senior year. Called ‘Capstone’ courses, these culminating design classes give students a rigorously challenging, real-world, immersive engineering experience.

Students are guided through the various stages of a professional engineering design project, including the design, fabrication and experimental testing of a complex component or system. Faculty serves as mentors, consultants and evaluators, and workshops on special topics, such as design and manufacturing of composite structures or design and programming of electronic components, are offered.

The Duke mechanical engineering senior design experience is intended to help students prepare for the workplace. During the first semester, in ME 421L(141L) Mechanical Design, students work in teams of 4 to 8 persons to design and implement a project, and use technical writing skills to produce a project plan and design report. During the second semester, in ME 424L(160L) Mechanical Systems Design, students complete their project and deliver a final report, project poster, and oral presentation.

The project costs for senior design classes are funded through department, industry sponsors and foundation support, with individual project team budgets ranging from a few hundred dollars to several thousand.

Often students will work with industrial partners in a collaborative research environment. As they tackle real-world engineering projects, the engineering students and their industry sponsors are afforded unlimited possibilities for learning and achievement.

Solar Hot Water System in Duke Smart Home - The goal of this project was to improve the overall heat transfer rate of the solar hot water system in the Duke Smart Home, thereby increasing both energy and cost savings. The design team spent a semester investigating ways to improve the system’s efficiency through implementation of variable speed pumps. Preliminary design work was performed and is summarized in this report. The variable speed pumps were installed in the Smart Home and the programming and experimentation processes are outlined herein as well. The experiment resulted in a marked efficiency improvement by running the pumps at variable speed rather than constant speed. Results of this project are presented in detail and suggestions for further improvements are presented in the conclusion.

Ram Air Turbine (2 Teams)- The goal of this project is to create a ram-air turbine design, completely from scratch. The scope of the project includes the housing, blade geometry, electrical generator and mount; due to time constraints, a deployment mechanism for the RAT was not included. More formally, our goal is to create a turbine capable of generating supplemental power for an aircraft using only the air flow around that aircraft. Our intended market is small, low-speed aircraft, as our RAT will be undersized for large commercial aircraft applications; the wind tunnel at Duke University limits us to a diameter of 10 inches, whereas airliner RATs are on the order of two to three feet in diameter. One purpose for our product will of course be power production for the primary electrical system in emergency situations. However, our RAT could also be used to provide a continuous supply of power in normal flight to devices that are separate from the aircraft’s main electrical system; the best example of this are crop dusters, which sometimes use a ram air turbine to power their spray pumps. Applications for external pods on unmanned aerial vehicles are also possible. This project was completed as two team competition in which the teams were provided a set of design objectives.

Agua Delicioso: Peruvian Water System - The aim of this project was to provide a running water source at the school in Ciudad de Dios, Peru. Our team spent a semester designing a pumping system suitable for this purpose. A prototype of the pump was constructed and subjected to engineering analysis. The first few prototypes were successful at pumping water but also experienced an unacceptable level of slipping of the rope on the wheel and thus improvements were necessary to minimize the losses caused by this slippage. After trying a few different solutions to the slipping problem, we settled on using V-shaped metal brackets attached to the wheel to “catch” the pistons as the wheel turned. This version (prototype III) performed very reliably and efficiently and thus was settled upon for our final design.

Rod Bending Device for Spinal Fusion Surgery - The fusion of vertebrae along the human spine using titanium rods is a common surgical practice in the treatment of a number of spinal disorders. Such a procedure requires a titanium rod adequately bent to match the natural curvature of the backbone. Currently, surgeons must bend titanium rods using potentially tiring and time-consuming manual equipment. The objective of this project group was to conceive, design, and produce a working prototype of a device that will bend a titanium rod to a desired conformation quickly, with minimal physical effort on the part of the operator; it must be fabricated of sterilizable material and be usable in an operating room setting. A proof-of-concept prototype was built to illustrate the viability of the essential mechanism of the complete design of the device.

Blood Pressure Testing Machine - The aim of this project is to develop a device to test current blood pressure monitoring devices. This device will test the monitors till failure which is defined as a loss of accuracy and/or physical rupturing of the device. The design team spent a semester working to develop a prototype which would simulate pulsatile pressure and heartbeat which could be used to continuously test the blood pressure monitors. Data was taken and stored throughout the repeated cycles including the pressure data for each cycle, number of cycles versus time, and cuff pressure versus time. After over a thousand cycles, the wrist monitor had not failed as originally planned it would through both analytical and computational analysis. However, it had shown signs of wear traceable to bladder fatigue. Given more time, further cycles should be completed to ultimately determine method of failure and propose new bladder design for more durable and extended usage in developing countries.

Smart Mailbox (2 Teams) - The aim of this project was to construct a “smart mailbox” to suit the needs of the residents of the Duke Smart Home. The goal of the team was to build a prototype that is theft-proof and can indicate to the residents that mail has arrived, while also being aesthetically pleasing and constructed with environmentally friendly materials. This structure would also be sustainable against vandalism in the form of objects striking the side of the mailbox. After careful planning and consideration of requests, a design for a prototype was sketched, manufactured and tested.

Smart Home Energy Storage - The purpose of this project is to create a system that will convert human energy used during exercise to energy that could charge a battery and thus power a given appliance. The team spent the past semester and a half researching possible equipment that could be converted to satisfy the stated goal. A bicycle trainer made of used car parts and connected to a car alternator was chosen as the device that will be used to charge a power pack. All preliminary design and calculations were completed and are included within. Using the 3-D modeling software SolidWorks and the finite element analysis package COSMOS Works, a conceptual design was created and tested for structural integrity. A prototype based on this design was then constructed in the lab.

Autonomous Underwater Vehicle - The goal of this project was to design and fabricate multiple components to be utilized in an Autonomous Underwater Vehicle (AUV). It is our intent that with the help of other members of the Duke Robotics Club from the ECE/CS departments the AUV will compete in San Diego at the end of July. The scope of the project included the chassis, mechanical claw, and marker dropper. It was our aim to improve the previous designs of the chassis and marker dropper and the mechanical claw was incorporated as a new task for the upcoming competition. The tasks that must be completed during the competition involve both vision as well as acoustic software in concert with a durable mechanical structure.

Greenback Renewable Backup Power Supply – The goal of the Green Back project was to create a backup power supply that would be renewable and “green” in nature. The focus of the project was on a functional residential power backup system that had a realistic potential to reach consumers and make a tangible difference in the real world. Analysis of the wants and needs of customers, of existing products, of government incentives provided a basic sketch of how the unit might function, and from there a prototype was manufactured.