A Case Study in Mechanical Vibration 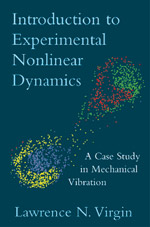 A book authored by Prof. Lawrie Virgin of the Department of Civil and Environmental Engineering, and Center for Nonlinear and Complex Systems, Duke University, Durham, North Carolina, USA. Published by Cambridge University Press in March, 2000.

Below can be found video images cross-referenced to particular figures in the book (no audio). These experiments were generally conducted in the School of Engineering at Duke University in the lab of the Nonlinear Dynamics Group.

Some photos of Duke and its School of Engineering are shown above. Past and present members of this group who made significant contributions to the laboratory include Jim Gottwald, Phil Bayly, Kevin Murphy, Mike Todd, Chris Begley, Kara Slade, Steve Trickey and Jonathan Nichols. These videos vary in length and size but are mostly a few MB and may take some time to download over a modem. They are best viewed using Apple Video Player or Quicktime, or RealPlayer which can be downloaded for free. Also included in this website are some color renditions of monochrome figures appearing in the text.

Video Footage: This chapter of the book describes the basic features of the experimental set-up used extensively. [Figure 6.2(movie)] shows video of the lay-out including the scotch-yoke forcing mechanism (built by Jim Gottwald) and the cart rolling on a parabolic well.

Color Figures: A color version of the LabVIEW virtual instrument can found in [Figure 6.4 (right)]. This VI was designed by Steve Trickey as part of his Masters research and actually built to acquire the data corresponding to the bifurcation diagram in Figure A.3 of the book.

Video Footage: Periodic behavior is typified by the video shown in [Figure 8.8(movie)]. Here a period-two oscillation is apparent as the cart rolls up toward the hilltop with alternating amplitudes. This data is included in the Journal of Sound and Vibration paper by Gottwald, Virgin and Dowell. 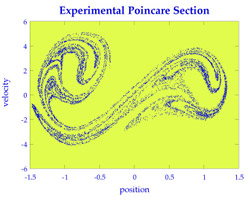 Video Footage: The aperiodic responses covered in this chapter include the video shown in [Figure 9.1(movie)]. This apparently random oscillation about and between the potential energy minima is chaotic.

Color Figures: The cart was allowed to run for about 3 hours to produce roughly 10,000 forcing cycles (and hence Poincare points), which is also shown on the right. 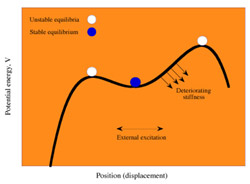 Video Footage: Escape from an energy well is covered in this chapter. [Figure 10.1(a)(movie)] shows an example of free decay which does not lead to escape. The cart rolls up very close to the hilltop but does not have sufficient initial energy to traverse it. The asymmetry in the waveform can also be detected. 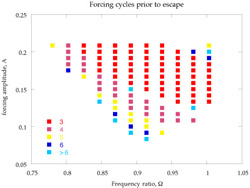 This is contrasted with [Figure 10.1(b)(movie)] where the cart starts rolling at a slightly higher initial level and escapes. A non-escaping forced case is shown in [Figure 10.9(a)(movie)], where again the cart comes quite close to the hilltop but eventually settles down into (slightly asymmetric) periodic behavior. This is also contrasted with another run, again started from rest but with a slightly different forcing magnitude [Figure 10.9(b)(movie)]. The final footage corresponding to this chapter is shown in [Figure 10.10(movie)]. Here the system is actually subject to very gradually increasing forcing conditions, i.e., it is not quite the same approach as used to acquire the data in the figure in the book but does show a typical transient phase prior to escape. These experiments also formed the basis of a Journal of Sound and Vibration paper by Gottwald, Virgin and Dowell. 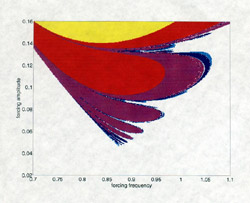 Color Figures: A general schematic describing how an escape situation might come about can be found below. When started from rest from a variety of forcing parameter values the boundaries between escape and non-escape are fractal in nature. You can view a color version of [Figure 10.10 (below)]. The corresponding numerical results are also best viewed as a color version of [Figure 10.11 (below)]. It should be noted that this figure is slightly different from the figure 10.11 in the book since in one case the forcing is direct and the other it is transmissible.

Chapter 12: The Effect of a Stiffness Discontinuity

Video Footage: The addition of an impact barrier to an otherwise linear system produces some interesting responses representative of a relatively large class of contact problems in engineering. [Figure 12.6(movie)] shows a typical periodic oscillation. A chaotic response is shown in [Figure 12.9(d)(movie)], although whereas the book figure relates to an offset barrier location this video shows a centrally placed barrier. These experiments were conducted as part of the doctoral research of Mike Todd here at Duke. 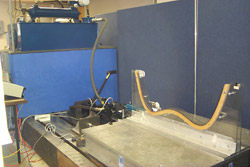 Color Figures: A second frequency is introduced to the forcing. A photo of the cart-track system on the shake table is shown in [Figure 6.1 (right)]. This hydraulic shake table can be programmed to input any desired form, including earthquake records, and the two-frequency signal not available to the Scotch-yoke.

Video Footage: If the frequencies are related by a rational number the subsequent response is not dissimilar to the previous results. However, if the frequencies are incommensurate then quasi-periodicity [Figure 13.5(movie)] or chaos [Figure 13.8(movie)] results, depending again on the magnitude of the forcing. These experiments were condcuted as part of Jonathan Nichols Masters research. The shake table used to obtain these results was capable of shaking the track with any user-prescribed function.

Color Figures: The final chapter takes a more global view of the dynamics of the Duffing oscillator. Color is very useful here in identifying basins of attraction. Smooth basin boundaries with four co-existing solutions are shown in [Figure 14.1] (with a blown-up view in [Figure 14.2]), and its equivalent in terms of time-lag coordinates in [Figure 14.3]. [Figure 14.5] shows 50,000 randomly selected initial conditions, i.e., a stochastic version of Figure 14.3. The equivalent experimental results were obtained using stochastic interrogation, a color version of which is shown in [Figure 14.6]. The data in this figure forms part of the cover design for the book (see the top of this site). For the case of increased forcing we encounter fractal basin boundaries, e.g., a time-lag version of [Figure 14.8], and its stochastic equivalent [Figure 14.9]. These global scenarios relate very much to chapter 10 and formed part of the doctoral work of Mike Todd.

Appendix A: A Nonlinear Electric Circuit 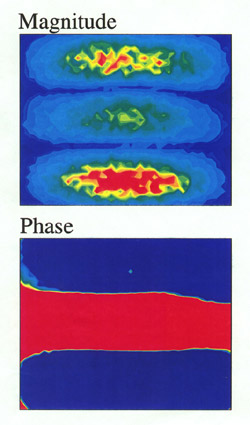 Color Figures: The first appendix describes a simple electric circuit designed to mimic the Duffing system, and was conducted by Steve Trickey as part of his Masters research at Duke. It is an anology with the double-well mechanical system, but with a dominant time scale about an order of magnitude faster. An earlier version of the circuit was used to obtain experimental data (via stochastic interrogation) in a similar manner to [Figure A.4(a)] and [Figure A.4(b)]. In fact the initial conditions leading to the two periodic attractors for frequencies beyond the region of resonant hysteresis is shown [here]. A color version of [Figure A6(b)] shows the basins of attraction when two coexisting attractors are present. [Figure A7(b)] shows the rate of attraction to these attractors with purple representing rapid convergence, orange medium, and white corresponding to those initial conditions which took longer (at least 20 forcing cycles) prior to convergence. The white areas are somewhat closely related to the stable manifold (separatix) associated with the unstable hilltop solution.

Appendix B: A Continuous System

Color Figures: The second appendix describes a continuous system which still exhibits many of the generic features of the low-order Duffing system. Although attention is focused on the lowest mode of vibration (i.e., the (1,1) mode), the system also exhibits other resonant frequencies, e.g., a color picture of the (3,1) mode can be found to the right. This picture was obtained using a scanning laser velocity vibrometer.

Video Footage: This thermally-buckled, acoustically-excited panel can be made to exhibit chaos. A chaotic 'snap-through' oscillation is shown in [Figure B.7(movie)]. This research was conducted by Kevin Murphy (at NASA Langley Research Center) as part of his doctoral research at Duke.