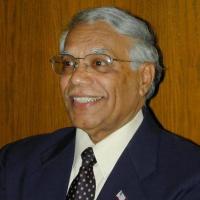 Professor Emeritus in the Department of Mechanical Engineering and Materials Science

Professor Garg's areas of interest include modeling, simulation, and control of dynamic systems and robotics. In particular, his research deals with characterization and control of nonlinear phenomena in physical systems such as robots, automated manufacturing, and high-speed ground transportation. In the area of robotics, he is interested in the design of feedback controllers using the concepts of modern control theory. In the area of high-speed ground transportation, he has conducted research on dynamics and control of ground-based, air-cushion and magnetically levitated vehicles.

One challenging area of research which Professor Garg is currently pursuing deals with the coordination and control of two robots handling a large structural object performing a series of intricate maneuvers in a confined work space. Analytical development of path planning and collision avoidance strategies and their practical implementation are being carried out in the Robotics and Manufacturing Automation (RAMA) laboratory. Two ABB Industrial grade six-degree-of freedom revolute jointed robots are available for these experiments. Major challenges related to this research effort include the identification and design of techniques for incorporating sensory data in the control algorithm, modeling the nonlinear dynamics of the manipulators, and the development of intelligent and adaptive control schemes for the coordination of multiple arms in the presence of unknown parameters and payload variations. Another area of research that Professor Garg is actively pursuing is sensor modeling, data acquisition and management, and data fusion in the context of swarm robotics. For the experimental work in this area, the Robot Control Laboratory has a number of KheperaII robots, LADAR sensors, and vision sensors.