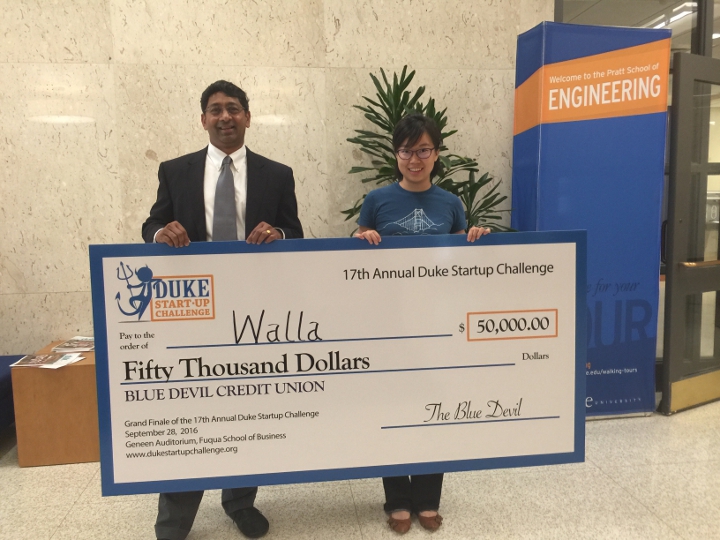 A college campus isn’t full of strangers that you walk by every day; it’s full of friends that you just haven’t met yet.

That’s the philosophy behind Walla, a new startup app that took home first prize—and $50,000 to continue development—in the culmination of this year’s edition of the Duke Startup Challenge.

“Entering into the competition was a huge leap of faith,” said Judy Zhu, founder of the startup and now a senior in mechanical engineering. “At the time, I barely had a business model and had only conducted a few interviews about what students would want in a new app that connects people, but I figured why not?”

Little more than a year ago, Walla was just a thought forming in Zhu’s mind. Her original idea was for a “generosity app” where students would put out a call for something they needed—a phone charger at the library or an Advil while on the opposite side of campus from their dorm—and folks in the vicinity would be able to lend a helping hand.

What Zhu discovered, however, was that what students really needed was more people that they could turn to. They needed a new route to physically meet more people they could relate to and with whom they shared common interests.

As Zhu puts it, they needed a better way to find their squad.

That’s where Walla hopped on the stage. Users post open invitations for anyone nearby to come and join activities on campus, whether it be lectures, lunches, pickup basketball games, discussion groups or political watch parties. When students find they have some time to spare and a need for socializing, they can turn to Walla to see what’s going on in the next 24 hours that catches their imagination.

“We launched a month ago and already have 900 users,” said Zhu. “We’re currently in acquisition mode, handing out cards to students across campus to try to build our base.”

Zhu obviously did not get from a barely formed idea to a competition-winning app full of momentum on her own. She leveraged many entrepreneurial programs offered by Duke. The Innovation Co-Lab, a “creativity incubator” on campus, supplied expertise and a small grant to help set up Walla’s servers. A year-long entrepreneurial program called Melissa & Doug Entrepreneurs supplied a stipend that allowed Zhu and her team to work on the project over the summer. Pratt’s own incubator, DUhatch, gave technical support and advice when needed throughout the year. 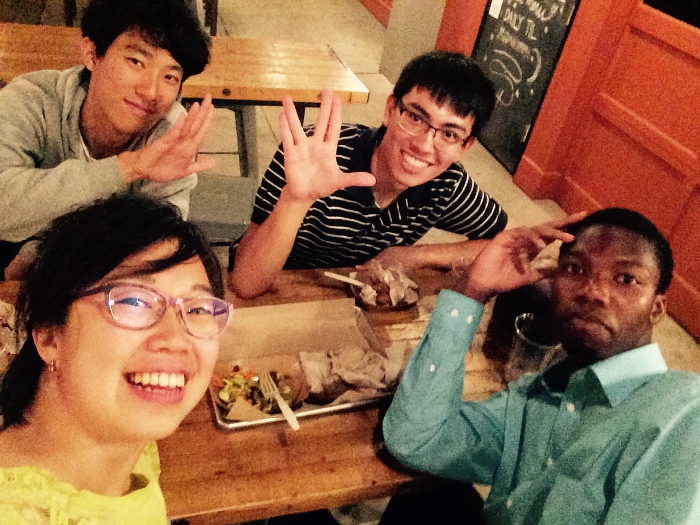 And according to Zhu, while the various financial grants and the grand prize from the Duke Startup Challenge are certainly helpful, the money pales in comparison to the value of having a great team.

“The biggest challenge was believing in the idea and believing that you’re actually building a product that people need,” said Zhu. “There’s a huge barrier between having an idea that people like and translating it into actual users. I was able to overcome that by having a really rock-solid team that believed in the idea together with me, so that no matter how rough it was, I knew that I wasn’t in this alone. “

“I am proud of students like Judy who identify a need, and have the confidence to design a solution and make it real,” said Ravi Bellamkonda, the Vinik Dean of the Pratt School of Engineering. “This takes perseverance, ingenuity and hard work, and students like Judy and her team embody the entrepreneurial spirit of a Pratt engineer.”

As with every team in the Duke Startup Challenge, Walla started as little more than an application to get past the first round. In the second round, Zhu and her team put together a business plan and started an Indiegogo campaign to raise funds. Walla attracted more than $5,000 through the crowdfunding campaign, enabling it to move on into the final round—a live pitch in front of a panel of judges.

Walla was the last to present, and Zhu couldn’t believe the quality of the startups that she was sharing the stage with.

“Before I start my pitch I just want to say wow, what an amazing stage to share with all of these great startups. I am truly astonished,” said Zhu at the beginning of her final pitch.

For Zhu, the nerves weren’t much more than the usual of being on stage. To her, it was more exciting to be on a legitimate platform as an actual real startup selling an actual product and having people actually listen. It was validating.

Walla got a lot more than validation after the dust settled on the competition—it won first prize and $50,000. Zhu says that money will be used to acquire and analyze more data and increase their rate of development. Her plan is to have Walla push out new iterations on a weekly basis as it tries to fit its users needs.

Zhu’s plan is to continue to work on her startup after graduation, rolling it out to colleges across North Carolina within the next year. After that, she hopes to expand nationwide.

“The way that technology has advanced, it allows us to make friends at a much faster rate, if we are open to that concept,” said Zhu. “What I’m hoping is we change the attitude of people in social situations to the point where every person that you haven’t met yet is just a friend waiting to happen.”