The symposium drew 180 from Duke, NC State and UNC-Chapel Hill to discuss polymers, biomaterials and more 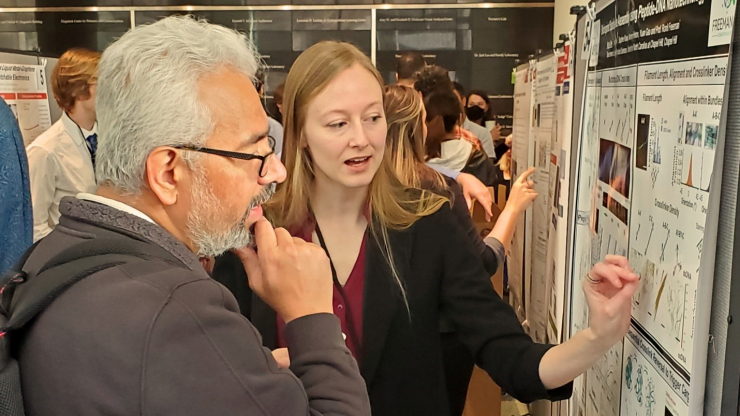 The Fitzgerald Center at Duke University was abuzz May 9, as the Duke Materials Initiative (DMI) welcomed 180 materials science and engineering colleagues from North Carolina State University and the University of North Carolina-Chapel Hill for the 14th Annual Triangle Soft Matter Workshop. As the first in-person version of the event in three years, the pent-up energy to discuss polymers, biomaterials and more while networking with colleagues overflowed the auditorium and atrium, spilling outside onto the sunny Harrington Engineering Quad.

“We’ve got such a fantastic soft matter community in the Triangle, and having that community back together to share ideas for a day was invigorating for everyone. We look forward to seeing the great ideas that come out of the interactions!” said Stephen Craig, William T. Miller Distinguished Professor of Chemistry, director of the NSF Center for the Chemistry of Molecularly Optimized Networks and one of the co-organizers.

The full-day event rotates annually among the three universities, but during the last two years of the global pandemic, it moved online into a half-day format. Over time, it has helped to establish North Carolina’s Research Triangle Region as a destination for soft matter research.

Graduate students and postdoctoral fellows occupied as much of the program as did the three invited speakers—each representing one of the universities—and the eminent keynote speaker, which is a testament to how committed the Triangle soft matter community is to train the next generation of materials scientists and engineers.

All told, 74 graduate students and postdocs lined up to grab the mic and present two-minute soundbites each about their research on display during the three poster sessions. After a networking lunch, the auditorium remained filled through an afternoon of the invited and keynote speakers.

Anna Balazs, Distinguished Professor of Chemical Engineering and the John A. Swanson Endowed Chair in the Swanson School of Engineering at the University of Pittsburgh and newly elected member of the National Academy of Engineers, delivered an animated keynote address. An expert in developing theoretical and computational models to capture the behavior of polymeric materials, nanocomposites and multi-component fluids, she spoke on the topic, “Chemically Controlled Shape-Morphing of Elastic Sheets."

“I am thrilled by the quality of all the speakers and the high level of engagement by participants throughout the day,” said Christoph Schmidt, the Hertha Sponer Distinguished Professor of Physics, co-founder of the Duke Soft Matter Center, and another co-organizer along with Stefan Zauscher, a professor in the Thomas Lord Department of Mechanical Engineering and Materials Science and director of the Duke Materials Initiative.