Technology and Sustainability: Student Projects at the Smart Home 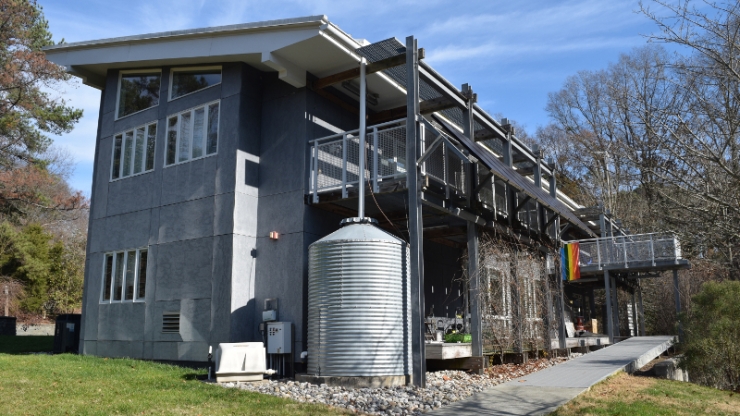 The Duke Smart Home has been a live-in laboratory for students since the 2007-2008 school year.

Any Disney enthusiast's first concept of a "smart home" probably began with Smart House, the 1999 film portraying the tale of a family's residence in a high-tech house. While Disney's version of a smart home had some pretty disastrous consequences, the Duke Smart Home, our very own version of a hightech and sustainable residential home, has allowed students to develop some fascinating and beneficial projects. David Smoot, a junior mechanical engineering student and current Smart Home resident, described the house as "both the building of the future but also the building to bring that future into today." With in-house lab facilities, a weather station and a building design created specifically for adaptability, the Smart Home, as described by Alex Weck, a senior civil engineering major, "is really the only place on campus where [students] can implement solutions and then have residents test them."

As a living-learning community, the home's 10 residents, along with Smart Home club members, develop and test new projects and initiatives each year. Most Duke students have likely seen some of the past projects in action—the solar benches and LED lighting projects installed around West Campus had their inception in the Smart Home. This year, students will not only expand on some older projects—like increasing the electric power of the solar benches—but also focus on developing new ones. Some noteworthy projects include house automation and HVAC (heating, ventilating, and air conditioning) systems, an algae window, a smart mirror and beekeeping/ gardening.

"[The smart home is] one of the few places in the country where you can get [consumer smart home tech and commercial automation systems] to talk to each other."

While the Smart Home already has some helpful and efficient automated systems in place, like mobile app-controlled lighting, air source heat pumps and recovery ventilators, Smart Home students want to expand these systems to make them more widely applicable and more efficient. This could lead to the integration of recently affordable consumer smart tech into some of the Smart Home's more expensive, commercially oriented systems. For electrical systems, this means creating an open-source automation server and installing more wireless sensors for monitoring microclimate factors like temperature and humidity. For the HVAC systems, a project led by Smoot, this means analyzing sensor data, determining heating/cooling efficacy and finding solutions to deficiencies. Potential changes include smart vents that would provide on-demand heating/cooling to an area and automatic window shades that could minimize heating from solar radiation. Smoot's goal is to "not just build the most efficient, perfectly normal forced air conditioning system you can build, but to also try to stop heat from getting into the space from the source."

"What if you took the bottom of the food chain and put it in a window?"

Weck, the lead of the Algae Window Project, is piloting another option for regulating solar heat—algae-filled windows. As an alternative to automatic blinds, he hopes to filter Spirulina (a form of blue-green algae) between windowpanes to change window opacity. The system would pump higher concentrations of Spirulina through the window to reduce its opacity (and reduce solar heating), or remove the algae when more light is desired. An algae-filled window would also have an interesting secondary effect of tinting the incoming light an appealing shade of green. Spirulina is a type of cyanobacteria that is easy to grow—a nutrient supply is added into the tank whenever more algae is needed. It can also live in extremely basic environments (waters of a pH of 10 or 11), which makes it hard for contaminants to grow in the same water. Spirulina can also be harvested, dried and consumed as food. A current hot topic in health forums, spirulina is about 70 percent protein by weight and is already being used as a health supplement. Ultimately, the goal is to have residents eat the same algae (once dried out) that pumps through their windows. As a side project, Weck wants to try making some foods out of algae. If residents can turn the algae into a flour-like substance, the baking possibilities become endless, and they could make cookies, cake and granola bars from their algae. 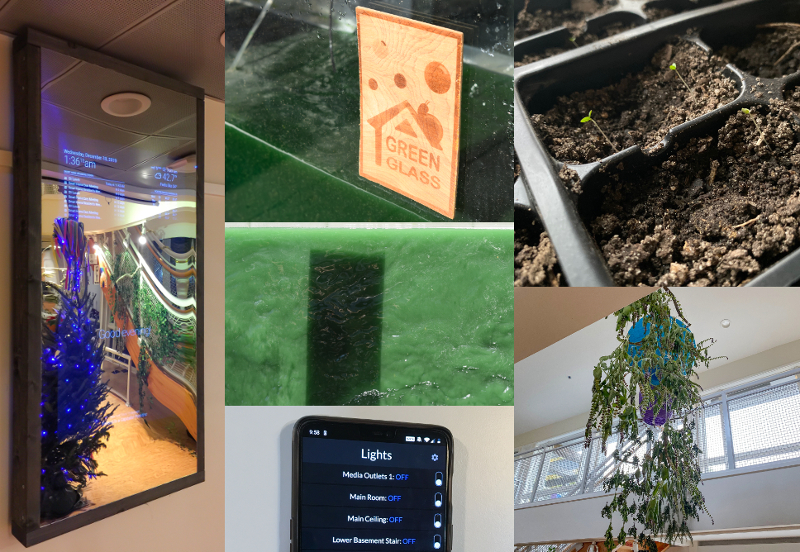 "Every Duke student needs a little pick-me-up in the morning."

Peter Candelora, a junior studying electrical and computer engineering, is managing the Smart Mirror Project. The project's goal is to create a visually appealing and functional information hub for residents of the Smart Home. The Smart Mirror looks and functions like a regular mirror, but has a screen placed behind the mirror pane. Similar to a smartphone lock screen, the smart mirror will show the user important notifications along with their reflection. The design is more functional and convenient compared to traditional message boards and is less intrusive than a television screen. To achieve this, Candelora designed a custom wooden frame to house the LCD screen and used a mounting system that allows the Smart Mirror to be integrated directly into the Smart Home's walls. Currently, the Smart Home residents have programmed the Smart Mirror to display the Smart Home calendar and fun, uplifting messages, but their final goal is to have it present information for realtime events like weather conditions, news and live bus route tracking.

The gardening/beekeeping project, led by Andrea Kolarova (Environmental Science, '20), involves integrating multiple new and revamped projects. Drawing on permaculture ideals, local fauna will be planted into the Smart Home's current garden beds to create a pollinator garden, and in the spring, a beehive will be created. This project is especially important due to the current endangered status of many bees. The pollinator garden and beehive will involve a collaboration with local Durham groups like the Durham Beekeepers Association, which will take care of the hive when students are not on campus. While the students hope to find local plants for the pollinator garden that do not require a lot of watering, they also plan to build a more efficient irrigation system for the garden. The current watering system already uses rainwater from the home's collection tanks, but this year's improvements could entail smart sprinklers (a weather forecast-dependent watering system) for each bed, re-designating the plant zones and creating a drip irrigation system. The idea that failures make for prime learning opportunities rings true in the residential smart tech field. It is evident that this year's Smart Home endeavors, even if unsuccessful, have the potential to make a large impact. The Smart Home's main goal is to explore methods of sustainable living, apply them to efforts on Duke Campus, and ultimately, share its findings with people beyond Duke. The process of getting to a less sinister, more efficient version of the smart house our generation imagined as kids is a lengthy one. But in the near future, homeowners will have the chance to install new developments, possibly ones that start right here on our campus, to create a more efficient home.

Jade Grimes is a junior pursuing a double major in civil engineering and environmental science with a certificate in architectural engineering.