The Shape of a Perfect Fire

From ancient Egyptians roasting a dripping cut of beef next to the Great Pyramid of Giza to a Boy Scout learning to build a log cabin fire in his backyard, everyone builds fires with the same general shape.

And now we know why. 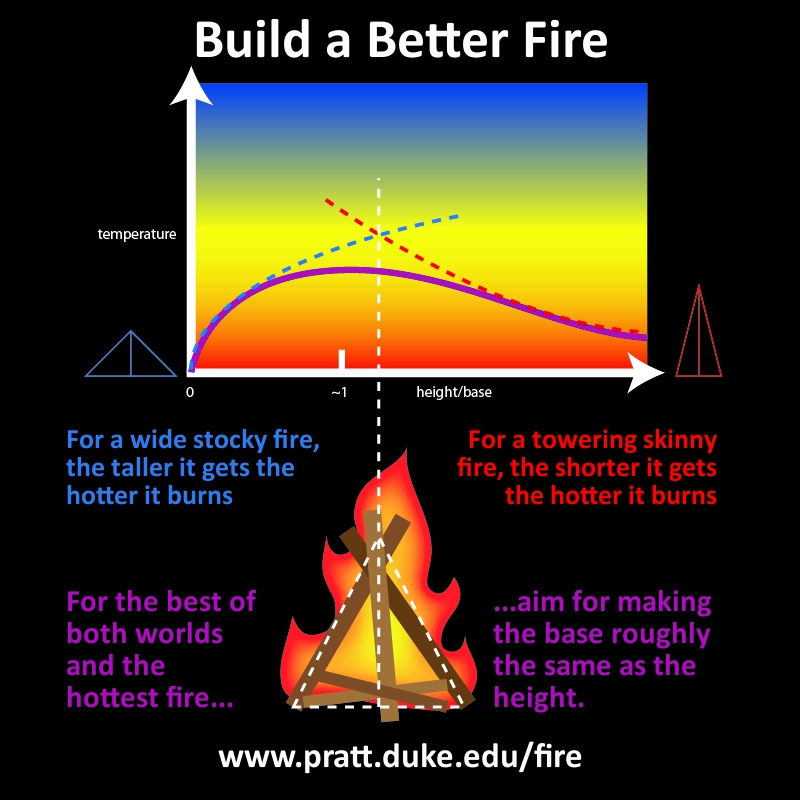 In a study published in Nature Scientific Reports on June 8, 2015, Adrian Bejan, the J.A. Jones Professor of Mechanical Engineering at Duke University, shows that, all other variables being equal, the best fires are roughly as tall as they are wide. This is why, he argues, everyone has built fires that basically look the same since the dawn of time.

“Humans from all eras have been relying on this design,” said Bejan. “The reason is that this shape is the most efficient for air and heat flow. Our success in building fires in turn made it possible for humans to migrate and spread across the globe heat flow from fire facilitates the movement and spreading of human mass on the globe, which is a direct prediction of the Constructal Law.”

In 1996, Bejan penned the Constructal Law that postulates that movement—or “flow”— systems such as trees, rivers or air currents evolve into configurations that provide easier and easier access to flows. Now internationally recognized, the law is increasingly finding applications in improving design and maximizing efficiency of manmade systems.

Bejan continued, “Our bonfires are shaped as cones and pyramids, as tall as they are wide at the base. They look the same in all sizes, from the firewood in the chimney, to the tree logs and wooden benches in the center of the university campus after the big game. They look the same as the pile of charcoal we make to grill meat. And now we know why.”

So the next time you’re out camping and want to build the perfect fire, now you know what general shape it should take.

But you already knew that, didn’t you?