Robotics for a New Generation 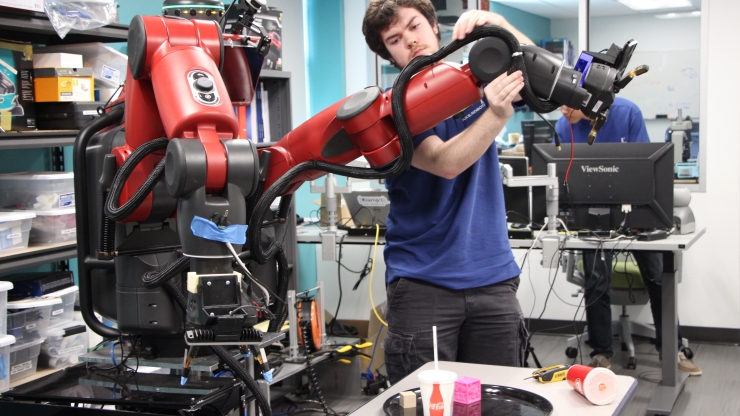 Lab members adjust the arms on the robo-nurse, TRINA, during the Duke Robotics Student Symposium on April 14.

The Duke Robotics lab was bustling with activity. In one corner, a small box-shaped robot was scooping up a ball and lobbing it high into the air for students to catch, its gears turning with each catapulted launch. Other guests watched as a black drone hummed through an obstacle course, diving up, around and through hula hoops positioned around the stage. Graduate students observed its progress in a glass enclosure, sporadically clicking keys on their computers. In another section of the lab, a large red robot was stacking paper cups while a lab member carefully directed its movements with a controller.

The robotics lab typically offers a dynamic work environment, but this time the additional activity was due to the second annual Duke Robotics Student Symposium, where over 100 Triangle-area high school students, undergraduates and graduate students came together to learn more about the variety of robotics-based projects at Duke.

The event, held on April 14 to coincide with National Robotics Week, featured presentations from Duke faculty members and graduate students, robotics demonstrations, and special guests from industry and the North Carolina Department of Transportation, all to showcase the expanding opportunities in the fast-moving field.

“We get to show off what we’re doing here, and we all think it’s really exciting,” said Miles Aubert, a PhD student in the Intelligent Motion Lab. “To able to share that excitement with people of college and high school age, and then have those students tell us about their own work with robots is really great to see.” Some of Duke’s leading roboticists shared how they were working to fulfill this goal through a variety of applications, with research that ranges from the roadways to operating rooms. Kris Hauser, director of the Intelligent Motion Laboratory, showed the audience videos of his lab’s ladder-climbing robot and their tele-nurse robot, called TRINA, that will eventually be used to treat patients with infectious diseases. Dr. Patrick Codd, a neurosurgeon and director of the Brain Tool Laboratory, discussed how his lab was using surgical robotics to reach deep-seated tumors during surgery. Mary “Missy” Cummings also took the stage to speak about her own work as director of the Humans and Autonomy Lab, where lab members are studying automation in drones and driverless cars.

In addition to the presentations about physical robots, researchers also discussed the theoretical concepts behind their work. Michael Zavlanos, an assistant professor in mechanical engineering and materials science, spoke about how teams of robots can form networks and coordinate their motion and actions to accomplish complex tasks. “One of the problems we’re interested in involves learning how to use realistic sensor models, like cameras, for more precise motion planning and estimation,” said Zavlanos. “As coordination between robots in a team critically relies on their ability to exchange information with each other, we are also particularly interested in methods that allow the robots to communicate effectively in the presence of uncertainty that is ubiquitous in the wireless channel.” Incoming faculty member Leila Bridgeman of MEMS also spoke about the problems she must solve when she works with robotic systems that can adapt to changing environments and variables. “As a control engineer, it’s my job to get robotic systems to do what we want them to do,” says said. “For example, if I’m designing a firefighting drone, my robotic system must work perfectly when it’s flying out with a huge payload of water and it has to work just as well when it returns without any water, so my controller needs to account for that variation.”

Although the event primarily featured talks from faculty and graduate student researchers, the high school students who attended the event also found ways to participate. The Cary Academy FIRST Robotics team took the stage to discuss the robot they created for robotics competitions, and many other high school teams mingled with the graduate students and faculty during demonstrations.

“We saw a lot of high school students not only attend, but be really engaged with the speakers and ask some of the best questions,” says Cummings. “The entire event was a great experience, and I think it indicates that the field of robotics is headed in a good direction.”