Platform could extend to detecting biomarkers for disease diagnosis 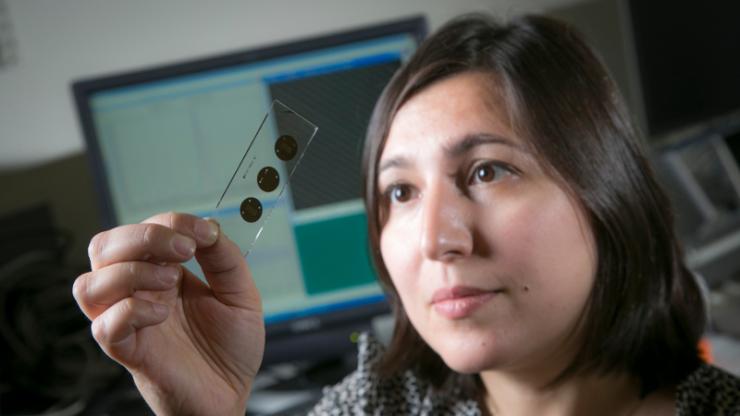 A startup company based on technology licensed from Duke University is looking to disrupt a $1 billion portion of the point-of-care diagnostics industry by harnessing a feature formerly considered a defect—surface roughness.

Many diagnostic devices that capture biomarkers suspended in blood rely on fluorescent molecules for their detection. While this method is popular in commercially used diagnostics, there are alternative and potentially more powerful methods. These methods, however, are currently restrained to laboratory settings.

One such method uses piezoelectric materials—materials that create an electric current when strained or vibrated and, conversely, vibrate when connected to an alternating current. Because the frequency of the vibrations changes when molecules are stuck to surface, researchers can catch and detect the specific proteins or antibodies that indicate a certain disease.

Current piezoelectric devices rely on precise manufacturing practices that produce a perfectly smooth surface, as roughness can throw off the delicate measurements. This constraint, combined with the need for relatively large sample volumes and extensive environmental control requirements, has stopped them from being adopted in clinical diagnostics, even though they have the potential to become highly sensitive, portable diagnostics tools.

By introducing a tailored type of roughness, however, Zehra Parlak, a former postdoctoral researcher in the laboratory of Stefan Zauscher, the Sternberg Family Professor of Mechanical Engineering & Materials Science at Duke, believes she has found a better solution.

“I was going on job interviews last summer when a light bulb went off in my head,” said Zehra Parlak. “I’d been working on the concept since 2013, I just didn’t see the commercial application until that moment, and I’ve been working to develop a company around it ever since.”

Dubbed “Qatch Technologies,” the company’s name is reminiscent of the quartz crystal used in its manufacturing and the “Quality factor” that it controls. Parlak’s idea is to introduce tiny microchannels into the detection device, multiplying the surface area that biomarkers can latch on to by 1000 times and changing the way that the crystal vibration reacts to blood.

The idea is, of course, more complicated than it sounds. Liquids couple to the detector differently in microchannels than they do if simply exposed on the surface of the device. Rather than being a hindrance, however, Parlak used this property to design an optimized platform. Though the details are currently protected, the result is a sensitive diagnostic device that’s much smaller and more robust than current options on the market and requires only a fraction of the blood needed for testing. The National Science Foundation (NSF) believes she’s on to something, having awarded Qatch Technologies and Duke University a Small Business Technology Transfer (STTR) award. This one-year, $225,000 grant is earmarked for high-risk, high-reward ideas to fund the solidification of the idea and formation of a business plan.

“What sets our device apart from anything done before is the way these sensors are fabricated—the material, the design and the size,” said Parlak. “By getting all of the applied physics and modeling right, we’re able to characterize extremely small volumes of liquid.”

The first application that Qatch Technologies will tackle is blood coagulation. Patients taking blood thinners must closely monitor their blood to minimize risks of hemorrhage. Surgeons conducting surgeries on high-blood-flow structures must make sure the site will clot before concluding the procedure. Current tests are either quick but inaccurate due to the presence of blood cells or highly accurate but slow and more invasive due to the process required to remove said blood cells.

Qatch’s sensors are especially well-suited for this application. The microchannels automatically filter out blood cells, only leaving behind the plasma that provides the most accurate results. The liquid is drawn into the channels through capillary action, not needing any sort of pump. Results are obtained by simply measuring the voltage generated by the sensor’s vibrations, no bulky optics or cameras required. And the whole test requires only 1 microliters of blood—roughly the size of an average salt crystal—making the process of acquiring a sample as simple as a small finger prick.

“What makes Qatch’s research into microfluidic sensors so promising is the potential to join the convenience of whole-blood testing with the laboratory-grade quality of plasma-based testing,” said Ara Metjian, a hematologist and assistant professor at Duke University’s School of Medicine, who will be helping to test the new device. “The opportunity to impact the healthcare of millions of people in a positive way is exciting.”

After working with blood coagulation, Parlak hopes to move into the broader field of detecting biomarkers for diagnosis.

“With the tiny amount of blood required for this technology, it’s like looking for a specific person in an elevator versus a giant banquet hall,” said Zauscher, who is a co-inventor of the technology and will lead the research efforts of the STTR grant at Duke. “This is a platform technology that could be used to detect a wide variety of diseases and conditions. All of the details have been demonstrated in the laboratory and are well-understood through computer models. This grant will help Zehra put them together into a palm-sized prototype.”