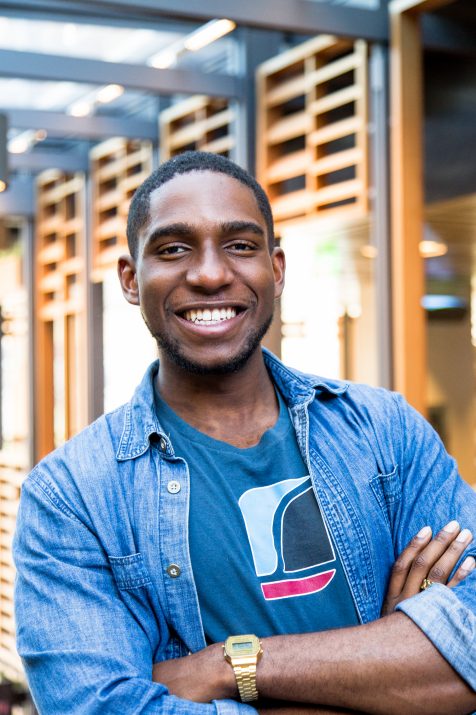 In his application essay for Duke, Uzoma Ayogu ’17 wrote that he wanted to help improve the country where he was born.

Now, he’s a senior and doing just that through his company Releaf, a platform that helps connect investors with small to medium enterprises (SMEs) in Nigeria.

Ayogu is a member of the 2017 class of Melissa & Doug Entrepreneurs, a student entrepreneurship program administered by Duke I&E that helps students build their own ventures.

Although Ayogu had already been working on Releaf independently of the program, he said his membership in the program pushes him and his team to perform better because they have to set goals and meet them on deadline.

“It’s been interesting because there is additional pressure from so many different directions,” he said.

Not only has the program helped connect him to potential customers, Ayogu said, but it’s also helped him build his entrepreneurial skills, such as learning more efficient and effective ways to conduct customer interviews.

Releaf began to form in summer 2015. Ayogu and his co-founders all had parents who lamented the state of things in Nigeria, and the young men wanted to make a change. Initially, they thought that a skills gap might be stifling Nigeria’s economy, so they set Releaf up as a platform for remote consulting. This meant they could crowdsource specific skills that SMEs needed, whether it was marketing, web development, or grant proposal writing.

While attending the African Christian Fellowship, they pitched the idea to the president of the African Development Bank, who gave them $10,000 to test the idea on the ground in Nigeria.

That approach worked for about a year, Ayogu said, and they helped a few companies get funded. But soon, they realized the model wasn’t sustainable.

Ayogu said his team knew that investors putting away capital to invest in Africa – but even though the interest was there, investments in African companies weren’t increasing.

The problem was something the team saw as an opportunity – lack of access to information about the companies.

The platform tells investors how companies are performing in the market compared to other companies so that even those with limited knowledge of the market can be informed before they invest. With a subscription to Releaf, investors can avoid paying for expensive reports from consulting companies, Ayogu said.

Releaf is now a team of eight people. More than 400 SMEs in Nigeria have agreed to have their information shown on the platform, a service that is free for the businesses. Releaf plans to monetize through investors subscribing to the platform, and the company aims to have its first 10 paying customers by the end of April.

Although Releaf is primarily a tool for investors, Ayogu said, “we envision it as capital infrastructure that can make doing business in Nigeria easier overall.”

If it’s easier to do business, Ayogu said, it will be easier for others to start businesses, thereby creating more jobs and lifting more people out of poverty. Eventually, he hopes Releaf will expand beyond Nigeria to other African countries.

“If we can improve the ease of doing business, hopefully there is some impact community-wide,” he said.

Ayogu got an offer to work at Microsoft after graduation but asked for a deferment so he can focus on Releaf. The decision to ask for the deferment was both risky and scary, Ayogu said, but he was sure that Releaf was worth it.

Now, Ayogu plans to move to Nigeria after graduation with his co-founder Ikenna Nzewi, where he will pursue a goal he set for himself as an incoming freshman at Duke.

“Releaf aligns so perfectly with what I feel called to do, which is technology to help the over 1 billion people that are underserved,” he said. “I feel so strongly about using technology to make life more livable and not just more convenient.”