DURHAM, N.C. – After creating a master “ingredient list” describing the properties of more than 2,000 compounds, Duke University engineers have now developed the a key to turning these ingredients into the next generation of electrical components.

The electrical compounds are known as topological insulators (TI), man-made crystals that are able to conduct electrical current on their surfaces, while acting as insulators throughout the interior of the crystal. Discovering TIs has become of great interest to scientists, but because of the lack of a rational blueprint for creating them, researchers have had to rely on trial-and-error approaches, which to date have had limited success.

Because of their unique properties, TIs can be created so that they can not only conduct electricity more efficiently, but can be fashioned to be much smaller that conventional wires or devices, making them ideal candidates to become quantum electronics devices, the Duke researchers said.

The “key” developed by the Duke investigators is a mathematical formulation that unlocks the data stored in the database and provides specific recipes for searching TIs with the desired properties. 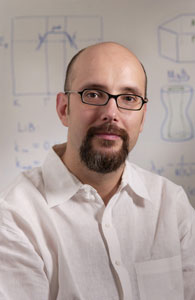 “While extremely helpful and important, a database is intrinsically a sterile repository of information, without a soul and without life. We need to find the materials ‘genes’,” said Stefano Curtarolo, professor of mechanical engineering and materials sciences and physics at Duke’s Pratt School of Engineering and director of the Duke’s Center for Materials Genomics. “We have developed what we call the ‘topological descriptor,’ that when applied to the database can provide the directions for producing crystals with desired properties.”

Finally the team discovered a new class of systems that could have been hardly anticipated without such a genetic approach.

The results of the Duke research was reported online in the journal Nature Materials. The work was supported by the Office of Navy Research and the National Science Foundation.

In November, Curtarolo and colleagues reported the establishment of a materials genome repository (aflowlib.org) which allows scientists to stop using trail-and-error methods for combining different elements to create the most efficient alloys for a promising method of producing electricity. The project developed by the Duke engineers covers many thousands of compounds, and provides detailed recipes for creating most efficient combinations for a particular purpose, much like hardware stores mix different colors of paint to achieve the desired result.  The project is the keystone of the newly formed Duke’s Center for Materials Genomics.

The new descriptor developed by the Duke team basically can determine status of any specific combination of element under investigation. On one end of the spectrum, Curtarolo explained, is “fragile.”

“We can rule those combinations out because what good is a new type of crystal if it would be too difficult to grow, or if grown, would not likely survive,” Curtarolo said.

A second group of combinations would be a middle group termed feasible, but what excites Curtarolo the most are those combinations found to be robust. These crystals are those that are stable and able to be easily and efficiently produced. Also, and just importantly, these crystals can be grown in different directions, which gives them the advantage of tailored electrical properties by simple growth processes.

While TIs generally are currently in the experimental stage, Curtarolo believes that with this new tool, scientists should have a powerful framework for engineering of wide variety of them.