One of the Pratt School of Engineering’s newest faculty members is now the holder of one of its newest named professorships.

At a ceremony on Monday, March 11, Jennifer West was formally invested as the Fitzpatrick Family University Professor in Engineering. She serves on the faculty of two Pratt departments – biomedical engineering and materials science – and holds secondary faculty appointments in Duke’s departments of chemistry and cell biology. She is also a member of Pratt’s Fitzpatrick Institute for Photonics.

On hand for the investiture was Michael Fitzpatrick ’70, a high-tech entrepreneur and longtime supporter of Duke whose family has contributed more than $50 million to engineering education and research, including $25 million to establish the photonics institute in 2000. The investiture was held in the Fitzpatrick Center for Interdisciplinary Engineering, Medicine and Applied Sciences (FCIEMAS), which doubled the size of the engineering school when it opened in 2004.

“Since the Fitzpatrick Institute opened, the faculty has grown from 25 to 86, the number of departments represented has gone from seven to 28, the number of undergraduate students has jumped from 992 to 1227 and graduate students from 477 to 944,” Fitzpatrick said at the ceremony. “My experience is that when you think big, you achieve big, and the results at Duke have been breathtaking. We are honored and proud to be a part of all this.”

The Fitzpatrick Family University Professorship was established in 2011 to help Duke attract and retain “scholars of true eminence and excellence” who “have demonstrated their ability to transcend disciplines by producing superb scholarship in more than one area.” Designed to advance Duke’s signature interdisciplinarity, University Professors have appointments in more than one school or department. Supporting and retaining the world’s top senior scholars is a priority of Duke Forward, the $3.25 billion university-wide fundraising campaign launched last September.

“When my family and I established the professorship we wanted to attract the best faculty in the country, because great people do great things. We are so happy to have Jennifer West here at Duke, and know she will continue to do great things here,” Fitzpatrick said, to applause, in introducing West.

West, who is well known for pioneering advances in nanotechnology and tissue engineering, came to Duke from Rice University, where she was chair of the bioengineering department and Cameron Professor of Bioengineering.

“Jennifer West is a significant star hire for the school and university,” said Tom Katsouleas, Vinik Dean of the Pratt School of Engineering. “She brings with her an extraordinary list of research and administrative accomplishments, and her work is especially impactful to the point that a number of disciplines claim her as in their field. We are excited that she’s here, and grateful to the Fitzpatrick family for their generosity and vision in establishing the professorship she holds.”

“The opportunities at Duke to work across disciplines are truly remarkable,” West said. “I’m very excited by the opportunities to collaborate with people doing interesting work in the medical school, sciences, engineering and beyond. I think our work will continue to evolve and we are looking forward to many exciting things in store as we establish our program here at Duke.” 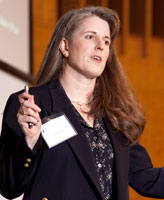 One area of West’s work clearly illustrates why her work spans more than one traditional department. She is developing man-made “micro-environments” that can mimic living tissues for use in bioengineered tissue. These environments are called hydrogels--soft materials that exist somewhere between a liquid and a solid.

By manipulating the makeup of the hydrogel, the types of cells and other biochemical factors, she and her team can create tissues and blood vessels. As an example, she has literally “grown” capillary beds in these hydrogels and tested them in a mouse model.

“One of the main hurdles facing scientists developing bioengineered organs or tissues is creating the tiny vasculature needed to nourish the tissue,” West said. “This approach may solve that problem.”

She has also designed hydrogels to coat arteries to release nitric oxide, an anticlotting chemical, to speed healing after angioplasty and as an interior coating for artificial grafts.

Another focus of her work has been the development of nanoshells with potential to kill cancerous tumors and improve tumor imaging. The nanoshells consist of a thin layer of biologically inert gold with a silica core. The nanoshell structure is designed or “tuned” to absorb a certain wavelength of infrared light at which body tissues are relatively transparent.

Once in a patient’s bloodstream, the nanoshells tend to accumulate in tumors because of tumors’ leaky vasculature. When infrared laser light is shined on the tumors, the nanoshells heat up and destroy the tumor. The nanoshells can also be tuned to reflect light, making them useful for medical imaging.

The therapy is already in three clinical trials for prostate tumors, lung tumors and recurrent head and neck tumors being conducted by Nanospectra Biosciences, Inc., a company West founded.

She has published more than 150 peer-reviewed journal articles and holds 14 patents, all of which have been licensed for commercialization by eight companies.

Her awards include 2010 Texas Inventor of the Year, a Rice University J.M. Chance Prize for Excellence in Teaching, the 2003 MIT Technology Review’s selection of 100 Top Young Innovators Award, and designation as a Howard Hughes Medical Institute professor. She has also been named an admiral of the Texas Navy.