Duke engineer Nico Hotz believes a novel hybrid system can wring even more useful energy out of the sun's rays.

DURHAM, N.C. – While roofs across the world sport photovoltaic solar panels to convert sunlight into electricity, a Duke University engineer believes a novel hybrid system can wring even more useful energy out of the sun's rays.

Instead of systems based on standard solar panels, Duke engineer Nico Hotz proposes a hybrid option in which sunlight heats a combination of water and methanol in a maze of glass tubes on a rooftop. After two catalytic reactions, the system produces hydrogen much more efficiently than current technology without significant impurities. The resulting hydrogen can be stored and used on demand in fuel cells.

For his analysis, Hotz compared the hybrid system to three different technologies in terms of their exergetic performance. Exergy is a way of describing how much of a given quantity of energy can theoretically be converted to useful work. 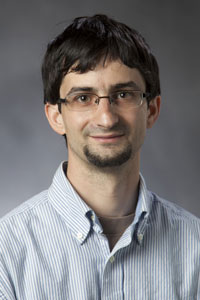 The paper describing the results of Hotz's analysis was named the top paper during the ASME Energy Sustainability Fuel Cell 2011 conference in Washington, D.C. Hotz recently joined the Duke faculty after completing post-graduate work at the University of California-Berkeley, where he analyzed a model of the new system. He is currently constructing one of the systems at Duke to test whether or not the theoretical efficiencies are born out experimentally.

Hotz's comparisons took place during the months of July and February in order to measure each system’s performance during summer and winter months.

Like other solar-based systems, the hybrid system begins with the collection of sunlight. Then things get different. While the hybrid device might look like a traditional solar collector from the distance, it is actually a series of copper tubes coated with a thin layer of aluminum and aluminum oxide and partly filled with catalytic nanoparticles. A combination of water and methanol flows through the tubes, which are sealed in a vacuum. 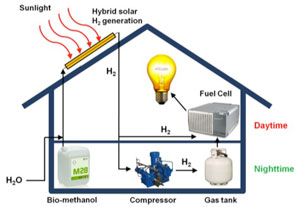 "This set-up allows up to 95 percent of the sunlight to be absorbed with very little being lost as heat to the surroundings," Hotz said. "This is crucial because it permits us to achieve temperatures of well over 200 degrees Celsius within the tubes. By comparison, a standard solar collector can only heat water between 60 and 70 degrees Celsius."

Once the evaporated liquid achieves these higher temperatures, tiny amounts of a catalyst are added, which produces hydrogen. This combination of high temperature and added catalysts produces hydrogen very efficiently, Hotz said. The resulting hydrogen can then be immediately directed to a fuel cell to provide electricity to a building during the day, or compressed and stored in a tank to provide power later.

The three systems examined in the analysis were the standard photovoltaic cell which converts sunlight directly into electricity to then split water electrolytically into hydrogen and oxygen; a photocatalytic system producing hydrogen similar to Hotz's system, but simpler and not mature yet; and a system in which photovoltaic cells turn sunlight into electricity which is then stored in different types of batteries (with lithium ion being the most efficient).

"We performed a cost analysis and found that the hybrid solar-methanol is the least expensive solution, considering the total installation costs of $7,900 if designed to fulfill the requirements in summer, although this is still much more expensive than a conventional fossil fuel-fed generator," Hotz said.

Costs and efficiencies of systems can vary widely depending on location – since the roof-mounted collectors that could provide all the building's needs in summer might not be enough for winter. A rooftop system large enough to supply all of a winter’s electrical needs would produce more energy than needed in summer, so the owner could decide to shut down portions of the rooftop structure or, if possible, sell excess energy back to the grid.

"The installation costs per year including the fuel costs, and the price per amount of electricity produced, however showed that the (hybrid) solar scenarios can compete with the fossil fuel-based system to some degree," Hotz said. 'In summer, the first and third scenarios, as well as the hybrid system, are cheaper than a propane- or diesel-combusting generator."

This could be an important consideration, especially if a structure is to be located in a remote area where traditional forms of energy would be too difficult or expensive to obtain.

Hotz’s research was supported by the Swiss National Science Fund. Joining him in the study were UC-Berkeley's Heng Pan and Costas Grigoropoulos, as well as Seung H. Ko of the Korea Advanced Institute of Science and Technology, Daejon.