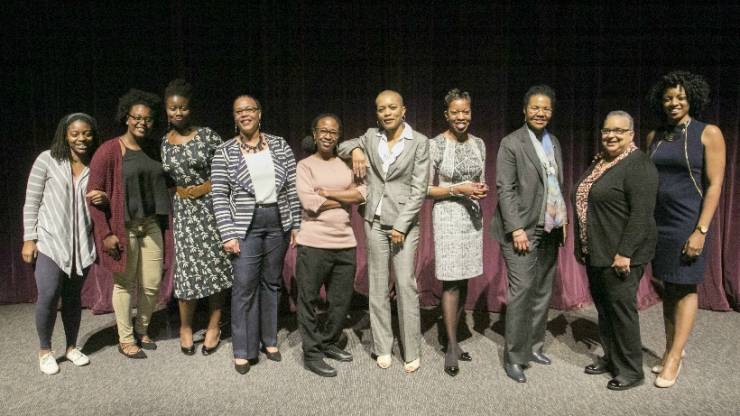 Panelists gather after the event, which filled Griffith Film Theater with students, faculty, staff and members of the public for a discussion and a free screening of the acclaimed film "Hidden Figures."

The achievements of women in engineering and scientific fields are more visible now than at the time of the true story told in the film “Hidden Figures.”

But panelists gathered for a screening at Duke on March 23 told audience members that women today can still benefit from emulating the persistence and drive shown by NASA pioneers Katherine Johnson, Mary Jackson and Dorothy Vaughn.

“Today, we get credit for our work, that has definitely changed for the better,” said panelist Adrienne Stiff-Roberts, associate professor of electrical and computer engineering at Duke’s Pratt School of Engineering and an advanced materials researcher. “But you need to be resilient, no matter what happens. You must keep your mind on your goal, and always stay focused on that.”

Stiff-Roberts was one of a panel of highly accomplished women of color working in advanced scientific and engineering fields who spoke prior to a free community screening of the Oscar-nominated film. “Hidden Figures” tells the story of three black female mathematicians whose contributions were critical to the success of first U.S. spaceflights in the early 1960s.

Held during Women’s History Month, the evening was sponsored by the Office of Diversity & Inclusion in Engineering at the Pratt school, the Women’s Center at Duke, The Kate Williams Fund Benefitting Women in STEM and Freewater Productions. Erika Moore, a PhD candidate in biomedical engineering studying with Fitzpatrick Family University Professor of Engineering Jennifer West, was the panel moderator.

“The chance to show ‘Hidden Figures’ presented us with an opportunity to celebrate those figures among us today who are making highly visible and outstanding contributions in their fields,” said Johnna Frierson, director of diversity and inclusion in engineering at Pratt and a PhD microbiologist. “And it was also a chance to have a conversation as a community about diversity and inclusion in science, technology, engineering and mathematics.”

Asked by audience members about their own experiences, several panelists said that resilience, especially through graduate school, is an important skill to develop.

“There will be challenges – you may be told at one point, as I was, that you might not be up to the challenge,” said Valerie Ashby, dean of the Trinity School of Arts & Sciences, whose research has focused on synthetic polymer chemistry. “But, you can fight your way back. Be resilient and be sure to celebrate your successes.”

Robin Coger, dean of the College of Engineering at N.C. Agricultural and Technical University, whose research expertise is in solving design problems related to tissue-engineered organs, said it was important for women in technical fields to find mentors.

“And remember: you might not find your mentor in your same field,” she said.

Going forward, the public image of the lives of people in science and engineering needs to change, and it is the job of scientists and engineers to lead that effort, said Kyla McMullen, a tenure-track faculty member of the University of Florida’s Computer & Information Sciences Department and a leader in the development of 3D audio.

“When I turn on the TV, I often see that science looks like this sterile, uncreative endeavor – I think that deters women,” she said. “It’s the job of every scientist to show that it is a creative and exciting profession.”

Panelists also included Fay Cobb Payton, professor of Information Technology/Systems at N.C. State University, whose research involves health care and digital equity in the context of information and communication technologies, and Ayana Arce, associate professor of physics at Duke and a member of the team that discovered the Higgs boson particle in 2012.

Jackson would have been impressed with the people attending the event, said her niece in remarks before the film began.

“I know it would make her proud to see so many women of color making such incredible contributions in STEM fields,” Robinson said.