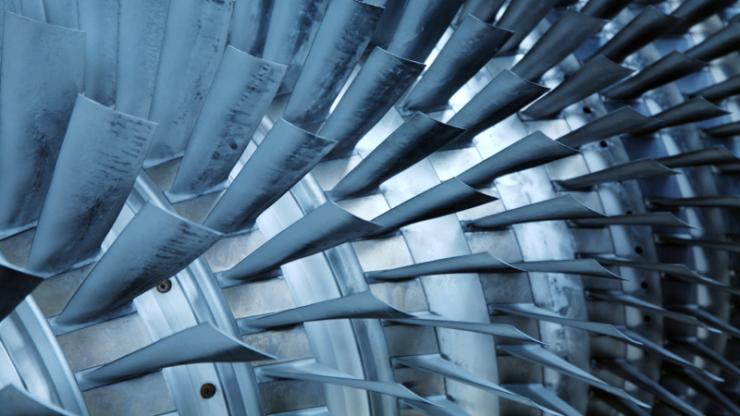 With multiple fan blades spinning thousands of times per minute and air flows moving faster than the speed of sound, accurately modeling complex turbine blades is a daunting challenge

If you’ve ever felt frustrated while staring at a little spinning pinwheel while a computer finishes a task, try waiting for six weeks.

That’s the situation aeronautical engineers often find themselves in when designing new turbine. With multiple fan blades spinning thousands of times per minute and air flows moving faster than the speed of sound, accurately modeling the complex machine is a daunting challenge.

Virtually all commercial aircraft use turbine engines and 90 percent of the world’s electricity is produced by turbines. In the early 1990s, the world’s leading turbine manufacturers, U. S. Air Force and NASA came together with academic experts and a software company to form the GUIde Consortium to address the “grand challenges” in turbomachinery aeromechanics.  Now in its sixth iteration, the program works to cut the time the pinwheel spins from weeks to days at the same time increasing the simulation’s accuracy.

“The GUIde Consortium funds pre-competitive research to meet the needs for the design methods of it’s members,” said Robert Kielb, director of the GUIde Consortium and professor of the practice of mechanical engineering and materials science at Duke University, which has served as the program’s leading institution since 2008. “For the past six years, we’ve focused on forced response of an embedded compressor, which dictates how interacting pressure waves force a turbojet’s fan blades to vibrate.”

These vibrations are both a safety and a cost issue. If the blades vibrate too much, they can be damaged over time and require costly maintenance. Or worse, they can break and cause engine failure.

Turbojet engineering companies each have their own in-house software to design new engines, but they rely on research conducted by the GUIde Consortium to make sure their software is accurate. They also purchase packages and programs from ANSYS, the one software company in the GUIde Consortium, which works with researchers in the group to test and improve their products.

In the past year, Duke researchers led by Shreyas Hegde, a PhD student in Kielb’s laboratory, addressed several key questions in modeling software produced by ANSYS.

“The industry’s models typically do a complete 360-degree analysis to figure out how each row of fan blades will cause its neighbors to vibrate,” said Hegde. “We’re trying to help simplify these simulations without losing any accuracy in the results.”

A turbojet fan consists of rows of blades that alternate between stationary “stators” and rotating “rotors.” Even though a large engine has several sets of each, simulations used in the design stage typically only model one rotor sandwiched between two stators.

In one recent study, Kielb, Hegde and their colleagues looked to see what effects adding another downstream rotor has on the simulation. They found that the pressure waves coursing through the system often reflect back from this stage and affect the vibration of the fan blades found earlier in the engine.

“That’s not the best news for companies designing turbojets, because the more complicated the model becomes, the longer and more difficult to interpret the results,” said Kielb. “But if you didn’t include that extra rotor, you might reject a design even though interactions effects from that rotor would reduce the forced vibration enough to make it work just fine. Or the opposite can happen, where adding the rotor to the analysis shows that the vibration amplitude will actually be higher.”

Simulations are easier to complete if each of the rotors and stators have a number of fan blades with a common denominator. For example, if the standard stator-rotor-stator simulation described above contained fan blades numbering 44-33-44—the common denominator being 11—it could be simplified to only 4-3-4, but still be perfectly accurate.

In non-uniform models, one of these numbers is slightly off. In this example, the number of fan blades might change to 44-33-48. Even slight differences such as this has long been a thorn in the industry’s side when trying to simulate a design’s performance.

In another recent tweak to the software, ANSYS made it possible to complete shortened simulations of these non-uniform models, and turned to Duke to check their work.

“We put together a whole 360-degree model that included all the complexities you could think of,” said Kielb. “That produced a more accurate representation of the new ANSYS software’s abilities and limitations.”

The group is finding that in most cases the ANSYS software works well, but in some cases, it doesn’t work very well, and the companies need to know which cases are which.

And so does ANSYS. Thanks to the work done at Duke, the software company can discover problems with their methods and fix them, which helps the entire turbine industry.

“The GUIde Consortium has been going on for the better part of two decades, and it’s turned out to be a really mutually beneficial arrangement for everyone involved,” said Kielb. “We’re going to spend another two years making these forced vibration simulations work as well as we can, and then the consortium will move on to other challenges.”