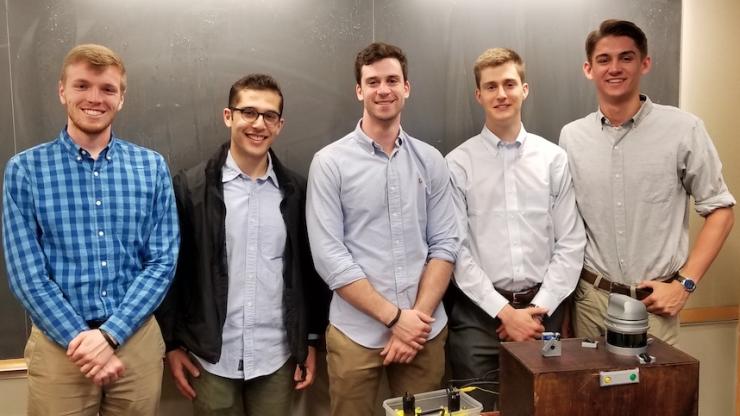 Earlier this year, automaker General Motors (GM) announced its intention to start mass-producing autonomous vehicles (AV) by 2019. The cars, which will be used for commercial ride-hailing, won’t even have steering wheels, or pedals. It was a bold statement—but the company had bought its own Light Detection and Ranging (LIDAR) sensor manufacturer a few months prior, and had launched a beta AV ride-hailing service for its own employees in San Francisco just a few months before that. In fact, ever since its acquisition of Cruise Automation in 2016, GM had been pushing to the front of the pack in AV development.

Duke Mechanical Engineering alum Costi Shami E'13, MS'14 is a vehicle performance engineer in GM’s AV division, working at the company’s proving grounds in Michigan. He is also part of the company’s engineering recruitment team. “When I come to Duke to recruit, students always have a lot of good questions about the autonomous vehicle space, and what GM is doing to lead the space,” said Shami.

Shami thought that it might be beneficial for his company to get a fresh perspective on a particular area of AV design that is sometimes overlooked: the onboard cleaning system for the vehicles’ sensors. Autonomous vehicles navigate by using multiple sensors, including LIDAR, radar and cameras, so it’s crucial that their surfaces can be quickly cleaned and cleared if a car splashes through a puddle, or drives through a dust storm, or gets bombed by a pigeon flying overhead. It would be a valuable experience for the students, also. “This was a good way of showing the day-to-day activities that an engineer at GM is tasked with,” said Shami. “To come up with solutions, to think outside the box.”

“This was a good way of showing the day-to-day activities that an engineer at GM is tasked with—to come up with solutions, to think outside the box.”

Shami knew that with Dean Ravi Bellamkonda’s intense focus on undergraduate design experiences, a collaborative project between GM and Duke would be well-received; he pitched the idea to his colleagues at GM, and the company agreed to sponsor a senior design project supervised by Neal Simmons, the Gendell Family Professor of the Practice in Duke’s Mechanical Engineering (ME) department. “Externally sponsored projects are particularly valuable as the student/company interaction provides an amplified educational benefit,” said Simmons. “These interactions offer students the opportunities to engage with their sponsor’s engineering, manufacturing, marketing, and leadership teams to approach sparsely defined problems and balance competing constraints found in real world projects.”

Shami gave the five students enrolled in the course some parameters to bound the design challenge, and they hit the ground running. “The hope was that maybe a new set of eyes would adopt different technologies or different implementations,” said Shami—which is exactly what happened.

“We started totally off the wall,” said student Ryan Cox, who served as the team’s unofficial project manager. Some of them—robotic arms, spinning cloth strips, chemical passive solutions, hydrophobic surfaces and ultrasonic devices—were quickly discarded because of budget or time constraints. The team pitched the remaining small field of ideas to Shami and Simmons, talking out the merits and potential pitfalls of each and considering factors such as the potential for scratching (LIDAR sensors can cost more than $10k apiece, and are fragile; any abrasions that might be caused by pushing grit and grime across their surfaces would render them unusable), the time of the cleaning cycle, and whether a similar solution had already been explored by GM.

The idea that made it through to the prototype phase, ironically, wasn’t completely novel; it was inspired by 1970s-era headlight wiper blades.

“This was the simplest solution. It was very elegant,” said team member Dan Connolly. “But the application and the way we were going to adapt it and make it self-contained, was new.”

The team, all seniors majoring in mechanical engineering, divided up to engineer the camera and LIDAR sensor cleaning solutions: Jack Gregory served as the structural designer for the camera solution, and Connolly for the LIDAR; Ziad El Arab handled the pumps and hydraulics of the water systems; Patrick Combe ran point on software and printed all of the pieces at the Innovation Co-Lab, where he worked; Cox handled small parts and systems integration.

The finished solutions bore little resemblance to their quirky squeegee ancestor; they were streamlined, and their motions economical. The LIDAR sensor cleaner, in particular, more resembled a UFO than a windshield wiper. And the pieces were modular, meaning that they could be taken off one sensor and attached to another. “We knew the design would have to change and adapt as autonomous vehicles change and adapt,” said Connolly.

“One of the key objectives I tasked the team with was to come up with something that had both form and function. That was a major concern from a design perspective, and from a public perception perspective,” said Shami after evaluating the team’s final presentation. “You want to see a car driving down the road that looks clean, that looks sleek. That was a massive strength that their design brought to the table. It looks polished.”

Cox said that the team was pleased with the outcome also, and has thought extensively about how their solutions could be improved further, with more time and money. Reducing the motor size, improving the circuitry and machining the parts, for example, could make the systems even lighter and more aerodynamic.

“I can see this solution going somewhere,” said Cox. “I can imagine it applied in the real world.”

more about Mechanical Engineering at Duke