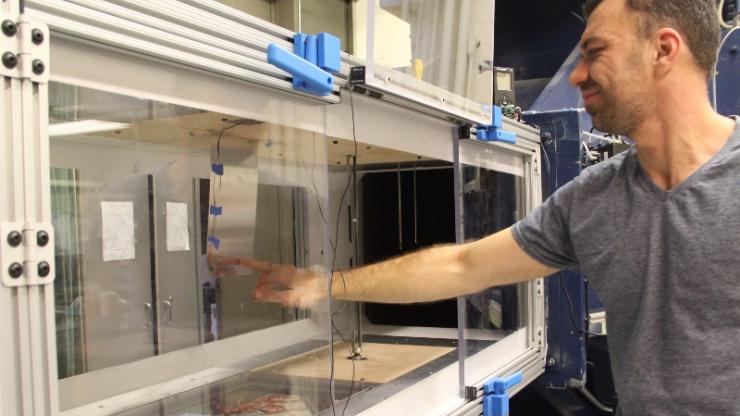 “Everyone is trying to get free energy—from the wind, from the waves, from the sun,” said Dani Levin, a Duke MEMS PhD student in the lab of Professor Earl Dowell.

“Everyone is trying to get free energy—from the wind, from the waves, from the sun.”

As an aerospace engineer who specializes in designing structures to avoid destructive vibrations, it was only natural for Levin to approach the quest for sustainable energy by applying what he knows about flutter and limit cycle oscillations, or LCO.

Because of its potential to cause structural failure, flutter is nearly always engineered out of structures. “Usually flutter is not desirable,” said Levin. “But sometimes violent flutter can turn into moderate LCO, which will cause no failure, and this can be useful.” Levin wanted to explore the potential of harnessing the energy generated by flutter, and he took a six-month detour from his dissertation work, with the support of his advisor.

Levin set up an experiment in the aeroelasticity lab’s wind tunnel, using a thin aluminum plate and piezoelectric elements, which generate voltage in response to mechanical stressors like flutter. He found that by increasing the vibrations’ frequency and amplitude, creating more curvature in the vibrational motion, using efficient piezoelectric elements and reducing air speed, he could squeeze the most power from the motion of the plate—sometimes increasing efficiency by more than 200 percent.

Are large-scale flutter farms in our future?  Probably not, said Levin. “My vision for this is, maybe you go on a long hike, on a cloudy day. You don’t have any solar power to charge your phone. But you do have a folded generator in your bag that you can take out, let it catch the breeze as you hike, and it can charge your phone. You can go even further and combine solar and wind. It’s scalable and useful. And,” he added jokingly, “it doesn’t involve scary mathematics. We’re using something that is so simple and so basic—at least for an aerospace engineer.”

Levin will present his project, titled “Improving Piezoelectric Energy Harvesting from an Aeroelastic System,” at the International Forum on Aeroelasticity and Structural Dynamics in Savannah, Georgia in June of 2019.