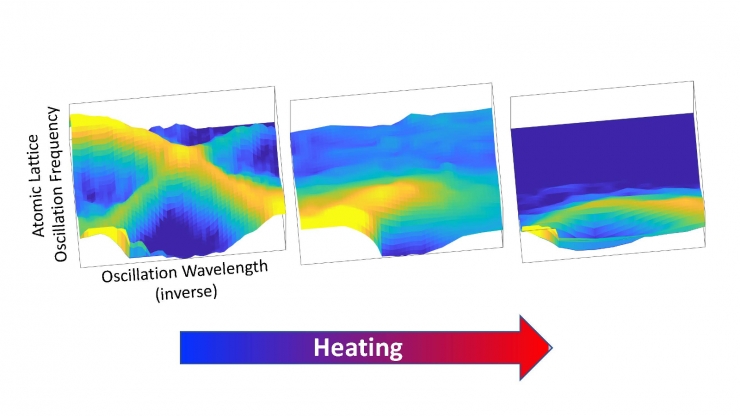 Materials scientists at Duke University have uncovered an atomic mechanism that makes certain thermoelectric materials incredibly efficient near high-temperature phase transitions. The information will help fill critical knowledge gaps in the computational modeling of such materials, potentially allowing researchers to discover new and better options for technologies that rely on transforming heat into electricity.

The results appear online on September 4 in the journal Nature Communications.

Thermoelectric materials convert heat into electricity when electrons migrate from the hot side of the material to the cold side. Because providing a temperature difference between its two sides is required, researchers are interested in trying to use these materials to generate electricity from the heat of a car’s tailpipe or recovering energy lost as heat in power plants.

Over the past couple of years, new records were set for thermoelectric efficiency with an emerging material called tin selenide and its sister compound, tin sulfide. The sulfide version is not quite as good a thermoelectric yet, but it is being optimized further because it is cheaper to produce and more environmentally friendly.

While scientists know that both of these compounds are excellent thermoelectric materials, they don’t exactly know why. In the new study, Olivier Delaire, associate professor of mechanical engineering and materials science at Duke, and two of his graduate students, Tyson Lanigan-Atkins and Shan Yang, tried to fill in a bit of that knowledge gap.

“We wanted to try to understand why these materials have such low thermal conductivity, which helps enable the strong thermoelectric properties they’re known for,” said Delaire. “Using a powerful combination of neutron scattering measurements and computer simulations, we discovered that it’s related to the material’s atomic vibrations at high temperature, which nobody had seen before.”

Low thermal conductivity is a necessary ingredient of any good thermoelectric material. Because electricity generation requires a heat differential between its two sides, it makes sense that materials that stop heat from spreading across them would perform well.

To get a view of tin sulfide’s atomic vibrations in action, Delaire and Lanigan-Atkins took samples to the High Flux Isotope Reactor at Oak Ridge National Laboratory. By ricocheting neutrons off of the tin sulfide’s atoms and detecting where they end up after, the researchers could determine where the atoms were and how they were collectively vibrating in the crystal’s lattice.

The facilities at ORNL were particularly well-suited for the task. Because the atomic vibrations of tin sulfide are relatively slow, the researchers need low-energy “cold” neutrons that are delicate enough to see them. And ORNL has some of the best cold-neutron instruments in the world.

“We found that the tin sulfide effectively has certain modes of vibration that are very ‘floppy,’” said Delaire. “And that its properties are connected with inherent instability in its crystal lattice.”

At lower temperatures, tin sulfide is a layered material with distorted grids of tin and sulfide lying on top of another, corrugated like an accordion. But at temperatures near its phase transition point of 980 degrees Fahrenheit—which is where thermoelectric generators often operate—that distorted environment begins to breaks down. The two layers, as if by magic, become undistorted again and more symmetric, which is where the “floppiness” comes into play.

Because the material is sloshing between the two structural arrangements at high temperature, its atoms no longer vibrate together like a well-tuned guitar string and instead become anharmonically damped. To understand this better, think of a car with terrible shocks as having a harmonic vibration — it will keep bouncing long after going over the slightest bump. But proper shocks will dampen that vibration, making it anharmonic and stopping it from oscillating for a long time.

“Heat waves travel through atomic vibrations in a material,” said Delaire. “So when the atomic vibrations in tin sulfide become floppy, they don’t transmit vibrations very quickly and they also don’t vibrate for very long. That’s the root cause of its ability to stop heat from traveling within it.”

With these results in hand, Delaire and Yang then sought to confirm and understand them computationally. Using supercomputers at Lawrence Berkeley National Laboratory, Yang was able to reproduce the same anharmonic effects at high temperatures. Besides confirming what they saw in the experiments, Delaire says these updated models will allow researchers to better search for new thermoelectric materials to use in tomorrow’s technologies.

“Researchers in the field have not been accounting for strong temperature dependences on heat propagation velocities, and this modeling shows just how important that variable can be,” said Delaire. “Adopting these results and other theoretical advances will make it easier for materials scientists to predict other good thermoelectric materials.”