DURHAM, N.C. – The webbed fingers of the Creature from the Black Lagoon might make him successful at terrorizing unsuspecting humans, but if he wanted to swim faster and did not have webbed fingers, he should have spread his fingers anyway, which would have also made him look scarier.

“We found that there exists an optimal spacing between fingers that maximizes the force exerted by hand during swimming,” said Adrian Bejan, professor of engineering at Duke’s Pratt School of Engineering. “The maximization of force is an essential of the evolutionary design of nature of swimming animals and athletes for survival and speed.”

Using computational simulations using water flow across cylinders, Bejan discovered the exact point where force is maximized – namely the spacing should be roughly half the width of the finger.

The results of Bejan’s analysis were published on line in the Journal of Theoretical Biology. Bejan’s research was supported by the National Science Foundation and the Air Force Office of Scientific Research.

“This finding is born out in competitive swimming, where the fastest swimmers have their fingers slightly spread,” Bejan said. “Just watch the swimmers next month at the Summer Olympics.”

Bejan likes to use elite competitive sports, such as Olympic swimming or running, as a model for the evolution of all animal locomotion, since the time records and data on each athlete is readily available. Just as importantly, measurable changes can be tracked over time. 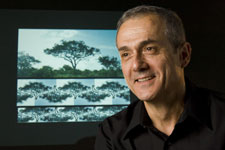 “We demonstrated in an earlier analysis of elite swimmers and runners with the fastest speeds over a 100-year period,” Bejan said. “What we found concerning the swimmers was that the fastest, and therefore the winners, were getting larger and taller.

“Size and height is important because locomotion, including swimming, is essentially a continual process of falling forward,” Bejan continued. “Body mass falls forward, then rises again. Mass that falls from a higher altitude falls faster, creating larger wave, which will carry the swimmer faster.”

Bejan said this evolution of body types and increased speeds can be predicted by the constructal law, a Duke-inspired theory of design in nature that explains such diverse phenomena as river basin formation, the anatomy of the capillaries with lungs or branches on a tree. The theory predicts “flows” in such fields as biology, economics and other human behaviors.

Other members of the team were Sylvie Lorente from the Universite of Toulouse, Erdal Cetkin from Duke, and Tunde Bello-Ochende and Josua Meyer of the University of Pretoria, South Africa.