Engineered to compete and aerodynamically designed for speed, imagine a car that can go from zero to 60 miles per hour in 3.8 seconds.  When it comes to racing, what else is there?

Duke University Motorsports, a group of Duke undergraduate and graduate students, has developed quite an understanding as to what it takes to build a competitive race car from scratch.  After designing, engineering, and building this year’s open-wheel race car for the Formula Society of Automotive Engineers (SAE) Competition, originally known as the ‘Mini Indy,’ Duke has once again raised brows and proved to be stiff competition. 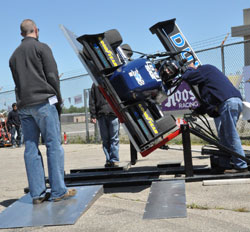 Duke University Motorsports is a student-led organization focused on applying the engineering knowledge they are learning in the classroom into designing and developing a true race car. For this extracurricular activity, freshman to senior undergraduate students as well as graduate students come together with various backgrounds in engineering and liberal arts.

“I feel that everyone on the team is extremely motivated and sees the importance of being on the team and how it adds a deeper dimension to our engineering experience at Duke,” says Costi Shami, senior mechanical engineering major and chief engineer for Duke Motorsports.

Such a group of students working together to reach the common goal of designing and building a competition worthy race car creates a great sense of teamwork, friendship, and a great networking opportunity for students to be able to utilize even after graduating.

“We are constantly in the garage, constantly working trying to get this car built in enough time to get a lot of testing done,” says Shami. Team members display hard work and diligence by putting the necessary time in to have their race car competition-ready under the helpful guidance and support from their faculty advisor Neal Simmons PhD, assistant research professor in mechanical engineering and natural sciences.

The Duke Motorsports Team builds virtually everything the eye can see on the car with the exception of tires and some of the electrical components like sensors and the engine control unit. About 95 percent of the car is built on campus by the team.

“We make the intake system and the exhaust system. We buy a used engine and rebuild it. We make the frame and have it welded by professional welders, but everything that can be machined by us is machined by us,” says Shami about the building process. Motorsport’s car can achieve 60 miles per hour in 3.8 seconds. “I mean, that’s what happens when you put a powerful motorcycle engine in a really tiny car.” For competition the team has to have a minimum of four drivers and they look to those who have put in the most time and effort into the building of the car and then have “driver training” days. Once the Duke University Police are alerted, multiple drivers get an opportunity to go out to a parking lot on a cone track. Those with the fastest and most consistent rounds in the lot course become competition drivers. Shami says “We don’t really choose drivers, they prove themselves on the track and that’s how who drives at the competition is decided.”

They have the opportunity to show off their swift creation in early May at the Formula SAE Competition in Michigan. The Formula SAE has been occurring annually since 1979 and attracts over 130 teams that compete for a week in an array of events and categories. It is the largest intercollegiate engineering competition in the world that attracts hundreds of universities worldwide that participate in it.

“It’s basically an open-wheeled racing competition that focuses not only on the car’s performance, but also on a marketing presentation for trying to sell the vehicles to the weekend racer, design presentations focused on validating the engineering behind every component on the car, and the overall cost of the vehicle,” notes Shami.

The competition judges are mainly looking for the team to justify why they chose to make the car the way they did. They request data comparing different designs, simulations showing that their initials calculations were valid, and then testing of the final product to show that what’s on the car is or isn’t what was expected from their simulations.

“They essentially treated us as engineers and asked us to show them our thought process and to prove to them that the racecar we designed and manufactured is a strong product. It’s a good foreshadowing of what engineering is like in the real world,” says Shami.

The Duke Motorsports team placed in the top five for American FSAE teams and finished 12th place overall out of 120 stiff competitors, which tied for their best placement since also placing 12th in 2009. They gained quite a bit of positive feedback from judges in regards to how the Duke racecar was aerodynamically packaged and how it performed in the racing events. Their race car was consistently around the top 10 percent for each race which took notice in the eyes of both the judges and the industry leaders throughout the week.

When asked about the plans for next year’s competition, Shami says “Our main goal is to build a competitive race car that aims to continue making improvements on previous designs. We also want to make sure that there is a strong foundation for future teams, so a lot of next year is going to be devoted to passing down all of the knowledge we’ve learned and recruiting new members.”

Senior mechanical engineering major and chief engineer for Duke University Motorsports, Shami, says the tam can be followed here as they prepare for another race on the road to Blue Devil success.