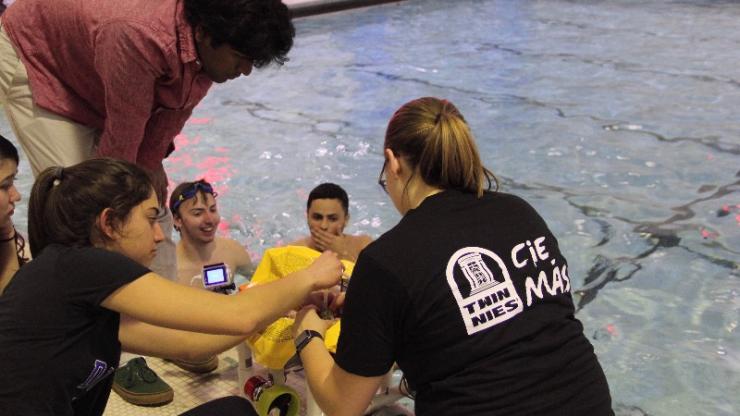 Greg Twiss’s students have tested liquid-fueled rocket motors, designed colorful jets of water to dance through fountains, and sent high-altitude balloons soaring 20 miles into the atmosphere to meet the central design challenge he creates for EGR 190 Applied Engineering Design, a mechanical engineering class that continues to build upon the design and ideation skills developed in EGR 121, Engineering Innovation. Thanks to word of mouth, the second-year Duke Engineering students who enroll in his class know to expect the unexpected. But when he unveiled this year’s challenge—building a submersible robot capable of detecting and lifting underwater treasure—some of those students still were taken by surprise.

“I thought it was impossible,” said Megan Gendregske ME ’20, recalling the moment the challenge was revealed. She said the difficulty of the task was compounded by the ambiguity of the location where the final test would occur; depending upon what pool was available during finals week, the robots might have to travel long distances through shallow water to reach their targets, or withstand higher pressure at the bottom of a deeper pool. As such, all of the four teams had to keep their solutions adjustable.

Gendregske’s group iterated for eight weeks, up to the very last minute their robot was in the water. During its final test at Duke’s Brodie Aquatic Center, the robot’s HD camera stopped functioning, and the team had to compensate for the sensory loss with increased communication. The bot then got stuck in the pool drain and had to be floated out and moved. Finally, the bot refused to descend at all. After some cajoling from the group, the bot did identify and retrieve all three sunken treasures—plastic, steel, and aluminum—in the proper sequence, within the allotted hour.

Gendregske’s emotional trajectory, from initial befuddlement to eventual confidence, was precisely engineered by her instructor. “There’s a kind of trick to getting the problem right, as far as scope,” said Twiss. “It can’t be too obvious, because then they’re not learning. It can’t be too hard, because then they’re just banging their heads against the walls. You find a nirvana, where in week zero the students are scratching their heads, but by week 13 they’ve done it. There’s an amazing transition from ‘There’s no way we’re going to do this,’ to ‘We’ve got this.’”

In traditional engineering classes, he noted, students are frequently expected to discover the single correct answer to a problem, but EGR 190 students must decide together how their team will work toward the desired outcome, almost certainly overcoming multiple false steps along the way. These failures, Twiss stressed, are the real teachable moments. “That’s where you learn,” he said. “That’s where confidence comes from. It’s by trying, and having the water flood into your vehicle, having it get stuck, getting frustrated, and overcoming it.”

This class showed me that even if you think an idea is perfect—it probably isn’t. So you might as well just start, and then you’ll be able to see where to adjust.

Gendregske said her favorite part of the design process became breaking the seemingly insurmountable problem down into smaller tasks, and that “just jump in” became a mantra of sorts. “One of the things I struggle with is thinking an idea has to be perfect before I start,” she said. “This class showed me that even if you think an idea is perfect—it probably isn’t. So you might as well just start, and then you’ll be able to see where to adjust.”

While Gendregske’s team showed up to the final test with a buoyant bot that used propeller systems to change direction, Jolan von Plutzner ME’20 and teammates brought a wheeled bot that drove along the bottom of the pool to reach the targets. Von Plutzner initially saw the challenge as an opportunity to hone her existing strengths; as a visual art minor and aspiring consumer product designer, she took immediate ownership of the team’s CAD designs. But over the course of the semester, she said her idea of individual ownership fell to the wayside. “It was pretty poetic,” she said. “Our system broke when the person in charge of coding wasn’t available, and the responsibility fell to the rest of us. We all jumped in, and then our roles just melded.” Achieving this synergy with her team, said von Plutzner, was her favorite thing about the class.

Twiss, a professional engineer who has spent much of his career developing products for Cisco and IDEO, knows that soft skills—like teambuilding—are an important part of a working engineer’s toolkit. In addition to teaching the technical engineering skills required for each challenge, he also encourages groups to communicate and collaborate to solve problems and increase their chances of success. When Gendregske’s group exhausted its $500 budget, for example, they negotiated with another team to share a battery, with the provision that the lending team went first in the trials.

“This class reformats what education is. It makes you an active participant rather than a passive recipient,” said Twiss. “We give you a lot of autonomy and $500, and the directive to fix your own problems if they arise.”

If Twiss’s words come across as unconcerned, his students beg to differ.

“He’s wonderful, very enthusiastic about this class. He really enjoys watching us grow, I think—to see the transition into becoming better engineers,” said Gendregske. “And he’s always willing to help in whatever way he can.”