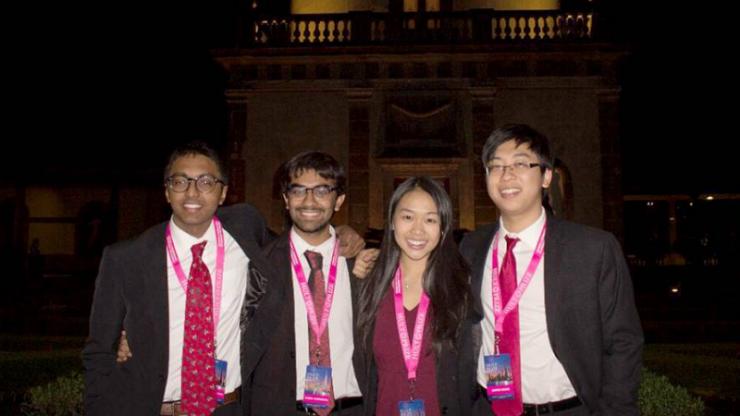 Now a Duke team is heading to the Hult finals with an idea to address India’s shortage of agricultural cold storage solutions by offering a novel storage and distribution network that compensates farmers and simplifies the supply chain.

The opportunity before them: A final prize of $1 million to fund the winning social venture.

Having triumphed in the campus Hult competition, team mPower pitched their business idea in Mexico City last month, winning one of 14 regional rounds across the world. This achievement will catapult them to an 8-week summer start up accelerator alongside 50 other teams at Ashridge Castle in London.

Traditionally, Indian farmers must sell their produce to middle men for a much lower price than its actual market value — around 25 percent lower, by some estimates. mPower plans to change this by purchasing produce directly from farmers, storing the produce with its cold storage technology, and distributing it to markets. This can create new jobs and empower existing communities, the team explained during its pitch.

mPower’s cold storage technology is a custom solar-powered modular refrigeration unit. Their units’ design focuses on passive cooling, reducing energy consumption and differentiating their product from others on the market.

mPower was especially equipped to answer this year’s challenge on energy because of their involvement in the energy space at Duke. Sanghi and Wang both live in the Duke Smart Home, and Sanghi regularly takes part in Duke University Energy Initiativeprograms, is a member of Duke’s Energy Club for undergraduates, and is working on energy access research through a Bass Connections project.

“Although my background is technical, this year I’ve really gotten interested in the social entrepreneurship side as it relates to energy,” Wang said. “I’ve discovered that working in the energy space is real, meaningful work.”

Sanghi, who is from India, and Chodavadia, who has family living there, knew firsthand of energy access challenges and inefficient agricultural processes in that country. They decided to target this population with their Hult Prize project.

“Energy access is broader than just giving people energy,” Sanghi said, pointing out that their solution also addresses poverty and agriculture. “Energy affects all aspects of a person’s life.”

Team mPower’s approach has evolved throughout the course of the competition. After winning at Duke, they reached out to Indian farmers through Facebook groups, seeking to better understand the real problems farmers face. Based on this information, they made adjustments to achieve greater scalability and a more impactful approach. They branched out from a traditional business model scalability and added the modular refrigeration strategy.

“We leveraged our resources at Duke, including the Innovation and Entrepreneurship Initiative as well as the newly launched Energy Access Project,” said Sanghi. “Our network of mentors helped us flesh out minute details within our business model, clarify logistics, and improve the viability of our proposed technology.”

The experience of competing at regionals was also instructive. “At regionals, we were exposed to different perspectives and made friends from 17 other countries who were gathered to solve similar challenges and make an impact on the world,” said Chodavadia. “It was also extremely encouraging to hear from the CEO of Hult Prize, Ahmad Ashkar, that our idea could be the next big thing,” he added.

Feng noted, “The Hult Prize Regionals gave me a different perspective toward career paths. Social entrepreneurship never felt a real pursuit to me until the regionals. It is not a fun exercise anymore, it feels so much more real. It made me reassess my priorities in life.”

Winning regionals came with some tradeoffs. To join the Accelerator program in the UK and continue in the competition, team members had to reassess prior summer commitments and internships. “It was a difficult decision to make, but we decided that we had to take this opportunity to work on something that could change the world and make real impact,” Feng shared.

Team members are eagerly anticipating the Accelerator program, where global experts will lead them through an 8-week MBA course covering topics like risk assessment, partnerships, marketing, sustainability, and launch strategy. After this accelerator, the top 6 teams are invited to pitch at the UN for the chance to win $1 million.

“After we posted on Facebook, several dozen farmers reached out to us to share their stories and challenges,” said Sherry. “We want to win the $1 million to be able to help them and millions like them whose monthly salary (equivalent of about $60 USD) precludes current cold storage options, which can cost the equivalent of $10 million USD.”

The team encouraged their peers to take advantage of challenges like the Hult Prize, and to be sure to reach out to the Duke network for inputs and feedback.

"The Hult Prize helps you gain experience in researching a problem, which is an extremely important part of undergraduate education," said Wang. The students also noted that many in the Duke community have helped them throughout the process and wanted to give thanks in particular to Matt Nash, Katherine Black, Rob Fetter, Jonathan Phillips, Aashna Aggarwal, Uzoma Ayogu, and Rebekah Shirley.

Are you a Duke student who wants to be alerted about student competitions in energy and/or entrepreneurship? Sign up for email updates from the Duke University Energy Initiative and/or the social innovation listserv at the Duke Innovation & Entrepreneurship Initiative.