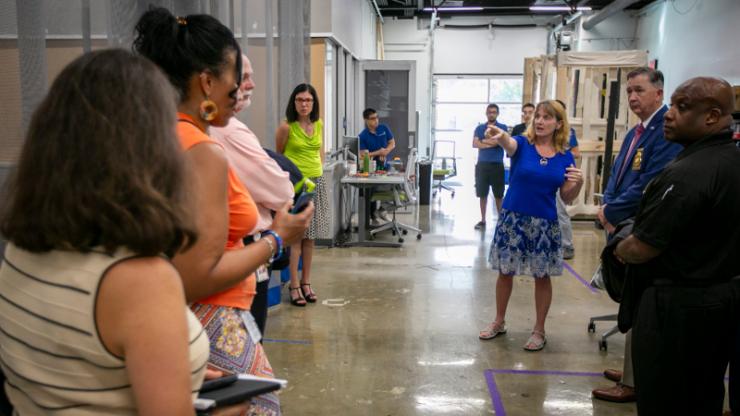 Missy Cummings points out features of her laboratory

With companies pouring billions of dollars into automated and driverless vehicle technologies, a myriad of products and services are poised to enter our daily lives—but the rapid development of unproven technologies is causing government entities from the Federal to local level to scramble to make sure they are safe and appropriately regulated.

Several Duke University engineers with expertise in the field recently welcomed a host of officials from North Carolina state agencies to help keep them apprised of the technologies and potential pitfalls on the horizon. Among the delegation visiting the Duke Robotics research high bay space October 3 were Department of Public Safety (DPS) Secretary Erik Hooks and other DPS representatives from the Secretary’s Office, NC Emergency Management, Adult Correction and Juvenile Justice, State Highway Patrol and State Bureau of Investigation; as well as representatives from the Governor’s Office and NC Department of Transportation.

"Our collaboration with North Carolina's outstanding universities to identify cutting-edge technology is invaluable to our public safety mission," said Secretary Hooks.  "It was very inspiring to see what our young people are doing to take us into the future. We appreciate the partnerships as we work together towards making our roads, our prison facilities, event venues and ultimately our communities safer."

The tour was led by Mary “Missy” Cummings, professor of electrical and computer engineering and director of the Humans and Autonomy Lab at Duke. Considered one of the nation’s leading experts on autonomous vehicle and drone technology, Cummings also works diligently to ensure her expertise has an impact on North Carolina’s roads and skies.

“My laboratory is working on smartphone and tablet apps for drone interfaces that allow just about anyone with any level of experience to safely navigate a complicated environment,” Cummings told the group. “But it’s not commercially available because it requires extensive development and testing before it can be used in public. And North Carolina should be asking for similar standards from any vendors wanting to operate drones in public spaces.”

Members of the group took turns using a tablet to navigate a drone through a series of obstacles set up in the laboratory. Cummings calls it their “Fukushima experiment” because it mimics conditions that emulate sending a drone into a disaster area such as the Fukushima nuclear power plant to conduct surveys. Her research is trying to figure out the perfect balance between drone automation and user control—too much of the former hampers the drone’s maneuverability while too much of the latter leads to too many crashes.

Cummings also talked about how drones will likely be used in the near future for more mundane tasks, such as surveying bridges for structural integrity checkups and roofs for insurance damage claims. One of Cummings’s own projects funded by the National Science Foundation is already moving toward having an impact in North Carolina, as she is working with the North Carolina Department of Public Safety on an app to acoustically detect drones attempting to deliver contraband at state prisons. 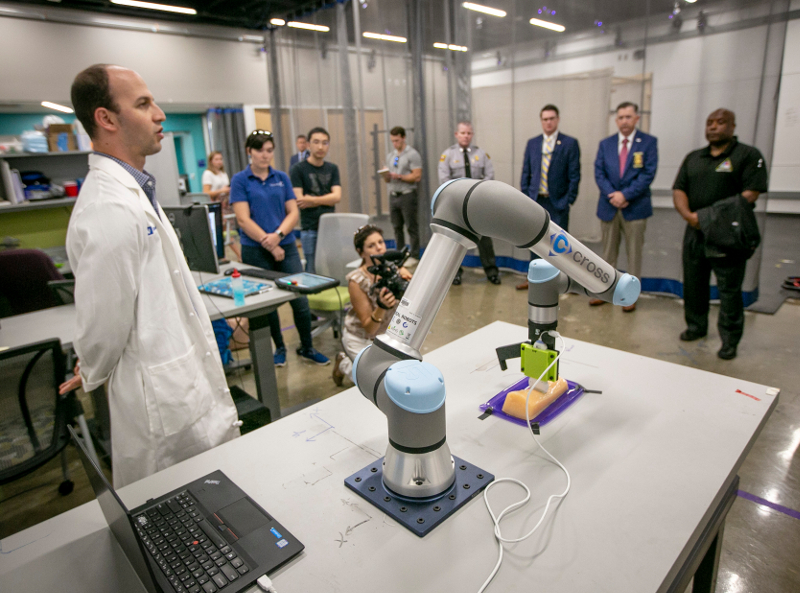 Buckland demonstrated a project working to teach an off-the-shelf robotic arm to locate and safely tap into veins in a patient’s arm. Right now the technology is just beginning to learn how to find the veins, much less introduce a needle into the equation. But Buckland, who is also a physician in the Duke University Emergency Department, has high hopes for the technology’s future and looks forward to being able to offer his patients the option of using the technology.

“I imagine this technology evolving to the point of those automatic blood pressure machines you see at pharmacies today,” said Buckland. “Having a machine automatically draw a blood sample or set up an IV could save nurses a lot of time and help healthcare systems treat more patients more quickly.”

Bridgeman’s demonstration included two robots following each other in a circle taped to the laboratory floor. As an expert in control theory, she is working to develop robust systems for autonomous vehicles that can handle unexpected perturbations without diminishing the entire system’s efficiency. When the lead robot suddenly slows down, for example, the trailing robot needs to be able to pump its breaks and recognize when it’s time to speed back up again. 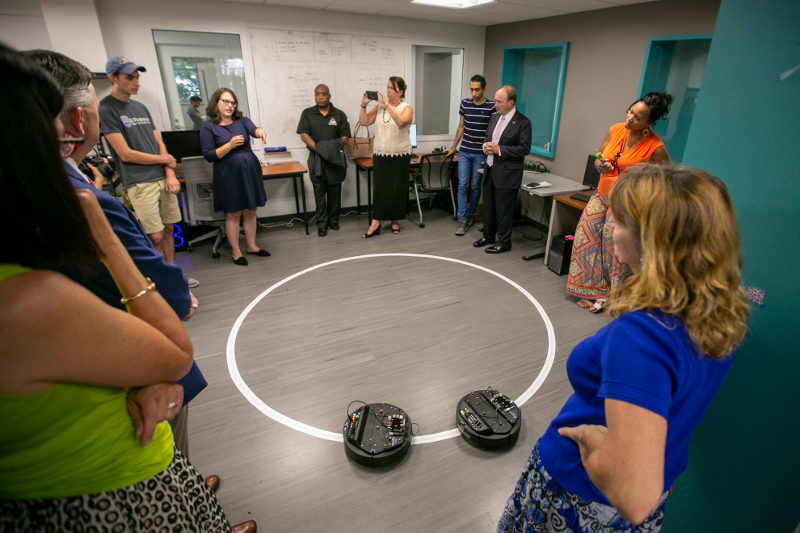 “If driverless cars are ever going to truly take over the roadways, it’s going to require massive networks of individual controllers interacting and coordinating with each other,” said Bridgeman. “Imagine a string of autonomous cars on I-95 stretching from Florida to Vermont. You don’t want one unexpected behavior to lead to a chain reaction that creates a phantom traffic jam hundreds of miles long. These controllers need to be able to react and recover from destabilizing behaviors at high speeds.”

“And not only do these systems have to have foolproof intrinsic controls, they have to be hack-proof as well,” added Cummings. “These are the types of abilities that vendors need to show before North Carolina allows them to begin operating in the public sphere.”