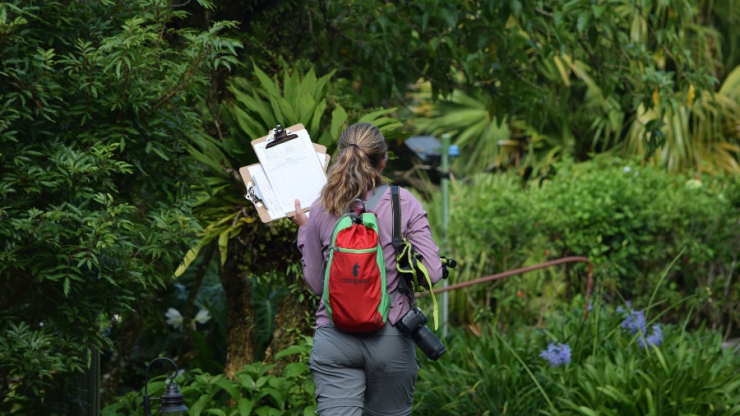 The Blue Devil Forest Divers had only just returned from a two-week long research trip to Costa Rica when they heard the good news, delivered via email from the headquarters of the World Biodiversity Forum in Davos, Switzerland: they had been cleared to compete in the semifinals of the $10 million Rainforest XPRIZE competition, scheduled to take place in Singapore in 2023.

The city-state of Singapore, believe it or not, has at its geographical heart two tiny old growth rainforests—the Bukit Timah Nature Reserve and the Central Catchment Nature Reserve. Macaques, pangolins and even some critically endangered species of bat have been spotted there. But cataloguing the true depth and breadth of the species contained within even the most diminutive rainforest requires creative new approaches—which is the whole point of the Rainforest XPRIZE.

XPRIZE organizes competitions that incentivize innovation. In pursuit of huge prize purses—and the chance to make a real, positive difference—teams from academia and industry strive to develop the best new ways to meet some of the world’s most pressing challenges. The aim of the Rainforest XPRIZE is to “reveal the true potential of the standing forest, accelerating the development of new, just, and sustainable bioeconomies,” according to the organization’s website.

Competitions are Duke professor of electrical and computer engineering Martin Brooke’s favorite way to teach, and they’ve found that the level of difficulty of the XPRIZE challenges are just right—hard enough to make milestones a cause for celebration, but not so hard that the problems seem insurmountable. This is Brooke’s third XPRIZE competition—they are co-leading the current competition with Duke School of the Environment professor Stuart Pimm—and the third time that a Duke XPRIZE team has advanced to the semifinals.

The Ocean Discovery XPRIZE, which wrapped up in 2018, focused on autonomously mapping the ocean floor, and the Duke team advanced to the final round. For that challenge, the Duke team used a heavy-lift drone that landed on water and deployed retrievable sonar pods to explore the underwater environment. The team worked extensively at Duke Pond, a water reclamation site on the university’s campus, but never in the open ocean. When it was time to compete in the finals in Greece, the team made the difficult decision to bow out of the competition, knowing that their system would most likely fail in unpredictable open waters.

From that experience, Brooke knew that field testing the Forest Divers’ data collection and identification technology in an actual rainforest was going to be critical to success. So with support from Pratt, Bass Connections and the Sony Corporation, the team packed its drones and headed to Costa Rica’s La Selva Biological Reserve and Research Station.

One might expect piloting drones through the incredibly dense rainforest canopy in search of species to ID would be a lot different than guiding them through the pines of Duke Forest, but Allen Parayil, a rising junior studying mechanical engineering and a two-year veteran of the team, said that wasn’t really the case. “Even our new pilots were able to get amazing photos by sending the drones into the canopy,” he said. More difficult than flying, the team agreed, was parsing some of the data that the drones collected, which was substantially richer than what they had collected back home.

Take the audio data, for example. “Every part of a wavelength collected in the rainforest is full of noise. Bats, bugs, birds,” said Jackie Fahrenholz, a master’s student in Forestry and Ecosystems Science and Conservation at the Nicholas School of the Environment. “You can go to Duke Gardens and put out a sound recorder and get a bunch of robins and cardinals, but that noise is sporadic.”

"When you look at a spectrogram, you can see bats at the top, at the ultra-high frequencies, crickets just beneath that, then frogs and birds. Then at the bottom are the sounds made by howler monkeys, calling out across vast distances."

“Rainforests are very busy,” seconded postdoctoral scholar Ryan Huang, who teaches data visualization and is equally at home with the computational and ecological aspects of the project. “When you look at a spectrogram, you can see bats at the top, at the ultra-high frequencies, crickets just beneath that, then frogs and birds,” he said. “Then at the bottom are the sounds made by howler monkeys, calling out across vast distances. It’s very cool to see that visual representation and be able to extract different voices across the entire range.”

The prospect of working in the urban rainforests of Singapore gives Huang pause, though. “I’m nervous about the amount of noise pollution we’re going to pick up,” he said.

But Fahrenholz is worried about what they might not pick up. “If we don’t pick up the sounds of bats, or of frogs, we’ll know it’s not a complete forest—that it’s starting to become what we call an ‘empty forest,’” she said. “It’s missing key species, indicating problems like the presence of disease or poor water quality.”

This is an aspect that the team will consider as they train their AI models for the future—that the data set they build for that purpose will need to include the condition of a species’ presence or absence.

The team also gained some valuable insight about identifying unfamiliar species— namely, that a multi-pronged approach works best. The team achieved some success in uploading photos of unknown plants and animals to iNaturalist, a site where identification is crowdsourced through its users. The prepackaged AI algorithms they used to try to identify birds by their songs, however, were not super helpful, because most of those packages are developed with North American species in mind. Local researchers and guides were able to step in, though, and positively identified a large number of species based on photos, video clips, and audio recordings.

And then, to help with the trickiest cases, there was biology student Nicolas Rey, toting a portable DNA sequencer. “Even trained professionals sometimes find it difficult to distinguish between two species,” explained Rey. “But every species has a unique DNA sequence. It’s the most accurate species ID that we can get.”

Brooke said the biggest challenge in the coming year—apart from raising the money to send the team across the world—is the “rotating cast of characters” that make up the Blue Devil Forest Divers. All the tech is developed in Brooke’s Ocean Engineering and Rainforest Engineering classes, which is open to both undergraduate and graduate students, but of course the nature of students is to graduate and move on.

Several of the Forest Divers said that the interdisciplinary nature of the team was their favorite thing about the project. “Because I’m on the cellular and molecular side of biology, I haven’t been exposed much to conservation,” said Rey. “Hanging out with people who want to make this their career has been really fun. And we’re creating technology that helps to value our ecosystem, which ties in to conserving it and is important work.”

“This technology holds so much promise for the future,” said Parayil. “It sounds cliché, but I’m becoming an engineer because I want to do good in the world. Contributing to this project meets that need… and the need to build cool things.”