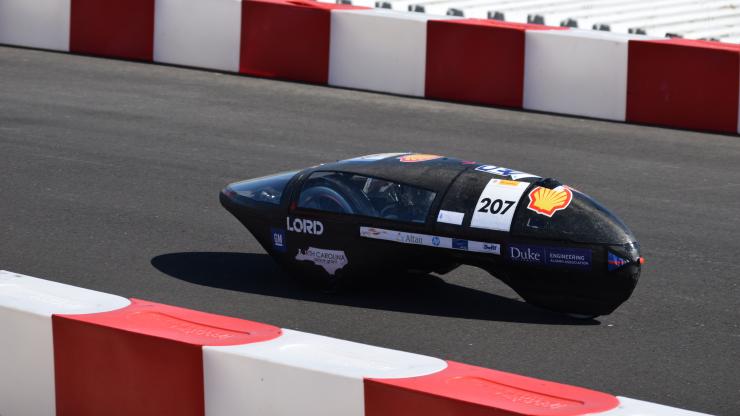 Last week, 17 students from Duke Electric Vehicles (DEV) traveled to Sonoma, California for the Shell Eco-marathon Americas 2018. The conference gathered 100 teams from across the Americas in a competition to see who could build the car that used the least amount of energy. DEV had entered two cars—one electric, one hydrogen—and they were feeling punchy. They had further improved upon their design of last year’s champion electric car, making it lighter and improving its motor efficiency by some 20 to 30 percent. The electric car race looked promising from the outset, and indeed Duke took first place for the second year running.

Congratulations to the students who competed in Shell Eco-marathon Americas:

The second race, for hydrogen fuel cell-powered vehicles, was one in which Duke had never before competed. The team took big risks with the car’s design, choosing a cell much smaller than those of the competing teams. “We really doubled down,” said Patrick Grady ’18, an electrical engineering student who has served as DEV’s president for two years. “We pushed a lot harder than we’ve ever pushed before.”

“One of the things that separated our team from the others is that we went with a much more complex design,” said Ismail Iberkak ’18, a mechanical engineering student. “A lot of teams oversize their fuel cells so they have plenty of power, which isn’t very efficient. We went with a fuel cell much smaller and more precise, but with no margin for error.”

From the start, their ideas were met with resistance, and advice to rethink their choices, which had them second-guessing their design—but they pushed forward.

“That was the big bet we took on for the competition,” said Iberkak. “Should we have done all this design work, all this analysis? Was it really going to work? Or should we have gone with the simpler, worse system?”

“Should we have done all this design work, all this analysis? Was it really going to work? Or should we have gone with the simpler, worse system?”

They had spent the entire fall semester optimizing all the variables that go into operating a fuel cell. “There was temperature, pressure, humidity, purging… optimizing all of those took basically all of last semester, working four to five hours a week,” said Shomik Verma ’19, another mechanical engineer on the team. “This semester there was a lot more—manufacturing, and putting everything in the car. That probably took ten hours a week. The weeks before the competition, we were putting in 12 hours a day.”

They used many of the unique resources that Duke offers its engineers—from their home base at the Foundry, they made trips to Hudson Hall’s Mechanical Engineering lab to conduct load analysis and tension tests on parts of the car to make sure that they could sustain their loads. They used the Pratt Student Machine Shop to manufacture aluminum parts. They also leveraged the knowledge of the faculty, working closely with Duke Mechanical Engineering & Materials Science Associate Professor Josiah Knight, who provided insight on the electrical systems and aerodynamics, and Assistant Professor of the Practice Nico Hotz, an expert in fuel cells.

With all of the effort and knowledge that had gone into the hydrogen car’s design, the team felt optimistic that the car would show well at the Eco-Marathon.

But then it didn’t. On the first day of scoring, the car wouldn’t run, and the team couldn’t participate.

“We didn’t know this, but the fuel cells were overheating,” said Grady. “We did a lot of troubleshooting to change the software, but we couldn’t figure out what was wrong.”

What was wrong was the direct sunlight, which made the fuel cell hotter in Sonoma than it had been in Durham, North Carolina, where the car was developed.

“In between official runs, we did some more testing,” said Grady. “We suspected permanent damage to our fuel cell, so we replaced it with our spare. We also increased the fan speed, and that finally got it working well.”

“The fact that it worked at all was a huge moment,” chipped in Chen. “I’ll be honest, when it was not working the first day because it was overheating, I was ready to give up. I actually left for an hour. When I came back, I saw everyone working so hard. I knew that they were struggling, too, but I saw them pushing through and I knew I had to push through, too.”

“It was really daunting,” agreed Iberkak. “It would have been very easy to make the call that we were not going to be able to run it.”

Together, they persevered to cool the hydrogen cells and get the car back onto the track. On the second day of racing, Duke won first prize with a score of 617 kilometers per m3 of hydrogen (4,307 MPGe), more than double that of the second-place team. Following their stunner of a victory, they were also awarded the Technical Innovation Award for their hydrogen fuel cell research on supercapacitor storage for load leveling. Grady has already made it a priority to share that research with other teams around the world.

After their experience at Sonoma, junior Verma has some advice to pass down to the freshmen who will join their team next year: struggling through a task is the best way to learn how to do it.

And Chen has this to add: it’s all about teamwork.

"I'm proud of how the whole team came together when we needed it most," said Grady.

Learn more about the club