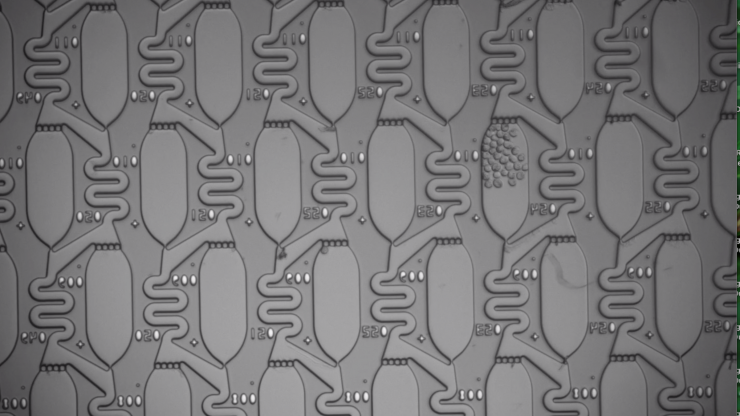 An acute myeloid leukemia cell line that was trapped in single-cell per chamber format at the initial time point and then grown for 6 days in FLT-3 inhibitor, quizartinib. More than 80 percent of chambers started off with one cell, but at the experimental endpoint there is one drug-resistant clone growing out.

Does a cell live or die when exposed to a drug therapy? If a cell lives, how fast does it grow, and does its growth rate change over time? These questions are central to a cancer biologist’s research.

And, choosing which cancer drug to advance into clinical trials to obtain FDA approval can be a $100 million gamble by a pharmaceutical company. Trials can establish whether a treatment if safe and effective, but only much later, sometimes after a drug is on the market, will they learn whether the drug is durable over the long term—or if a few outlier cells will develop resistance and lead to a relapse.

Celldom, a Duke University spinout company from the lab of Benjamin Yellen, associate professor in the Department of Mechanical Engineering and Materials Science, is bringing to market a system that aims to pre-screen potential therapeutics for long-term effectiveness by significantly improving the ability to completely characterize the phenotypes and genotypes of individual cells, instead of testing drugs in a broader environment like a blood or tissue sample.

“What we’re proposing is to give you a way to qualify drugs based on which ones are most likely to be durable,” said Yellen, chief technology officer of Celldom.

According to Yellen, the promise of single-cell analysis is in the ability to find rare cells in a population that have important clinical implications. For example, drug-resistant cells present at small fractions in a background of otherwise drug-sensitive cancer cells can actually become enriched during treatment, leading to tumor regrowth. Quantifying these rare cell responses could help drug developers screen drugs prior to clinical trials.

Yellen’s team has developed a tiny silicon chip that uses microfluidic technology to trap 6,000 cells at a time, each in individual chambers. Next, the cells are exposed to a target drug and undergo monitoring for days with time-lapse imaging. Within a few days, the image sets help researchers determine what percentage of the cells died and what percentage lived, and which ones grew quickly or slowly. Based on these images, they can then analyze the genomic properties of these cells to discover specific mutations or analyze gene expression patterns in the drug-resistant cells as compared to the drug-sensitive ones.

Through this combination of live-cell imaging and single-cell genomic measurements, the Celldom platform can predict which drugs are likely to lead to resistance, rule them out and therefore bypass the lengthy and expensive clinical trials process.

This work is one of many examples where the science of engineering and materials research is meeting the challenge of medicine with creative solutions. Yellen is an expert in microfluidics, the science of manipulating and controlling fluids at the submillimeter scale. The field emerged in the early 1980s and was used at the time, for example, in developing inkjet printer heads.

Today, microfluidics has given rise to a host of applications involving DNA microarray experiments. In fact, Celldom’s process involves labeling each individual cell on the chip with a DNA sequence, which acts like a barcode.

“We append these barcodes onto the RNA or DNA in the cells of each chamber, so that when we read it on the sequencer, we can trace it back to the individual chamber and therefore to the sets of images,” said Yellen. “What’s different about us from other companies is that we are developing a way to do this very cheaply and at very large scale.”

Another potential application area for the Celldom technology, after bringing this first one successfully to market, is in precision medicine, said Yellen.

For example, a patient would provide a very small sample of a tumor or blood, in the case of a blood cancer, and Celldom would test it on a chip with over 20 drugs to find out precisely which is the most effective treatment for them.

In addition to support from Duke’s Office of Licensing & Ventures and the Duke-Coulter Translational Partnership, Celldom has attracted support through private investment, federal grants from the National Institutes of Health Small Business Innovation Research Grants and angel investors. The company operates bi-coastally with teams in downtown Durham and in the San Francisco Bay area.

Yellen said he anticipates the company will remain bi-coastal, because it needs access both to molecular and cell biology expertise in North Carolina—cofounder Kris Wood is an assistant professor in the Department of Pharmacology & Cancer Biology at Duke—and the instrument development and software expertise in Silicon Valley. As for Yellen, personally, he says he will return to Duke at the end of his two-year sabbatical which began in January to teach, continue his research and, who knows, perhaps spin out another company one day.