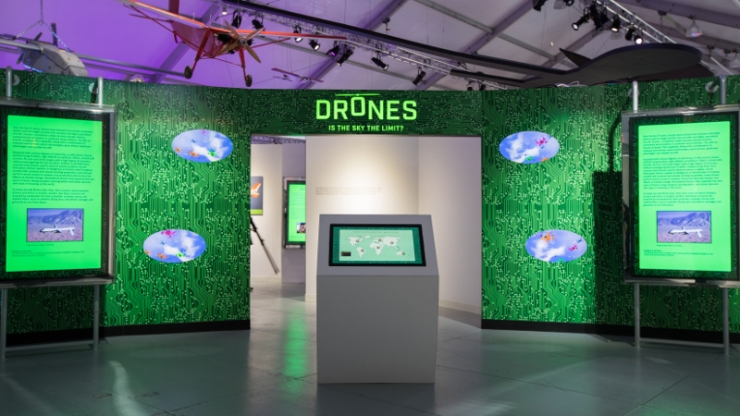 A look at the Intrepid Museum

Opening on Wednesday, May 10, 2017, Drones: Is the Sky the Limit? is the first major museum exhibition on unmanned aerial vehicles (UAVs). Appearing in a 6,000-square-foot custom-designed pavilion, the technology showcase was shaped in part by co-curators from Duke engineering Mary “Missy” Cummings, professor of mechanical engineering and materials science and director of Duke Robotics and the Humans and Autonomy Laboratory, and Alexander J. Stimpson, senior research scientist in Cummings’s laboratory and cofounder of Autonometrics, LLC.

“In 1903 with the Wright brothers’ first flight at Kitty Hawk, people were fascinated with the idea of simply sharing the sky with birds. In just a little more than 100 years, we are again capturing this spirit of aviation adventure by harnessing pilotless aircraft to augment humans in ways never envisioned by the Wright brothers,” said Cummings. “This exhibit truly captures our new transformative golden age of aviation, and will leave visitors amazed and excited by the future of autonomous flight.”

The Intrepid Sea, Air &Space Museum already features the aircraft carrier Intrepid, the space shuttle Enterprise, the world’s fastest jets and a guided missile submarine. For the next six months, the museum will also explore the history of drone technology, from its modern origins in World War I and its military development to its current applications in solving complex humanitarian and commercial challenges.

Of particular interest to Cummings, visitors will be able to watch the dizzying first-person viewpoint of a drone racing, get a sneak peek of a full-scale conceptual aircraft that may become the personal autonomous transportation system of the future, and marvel at Volantis, the world’s first “flying dress” on display to the public for the first time, designed by global superstar Lady Gaga, in collaboration with the technology development division of her Haus of Gaga (known as TechHaus).

The Duke connection to the exhibit also extends to the installations themselves, as the Duke Marine Lab provided the images, video and hardware for a case study on drones in conservation that they have used for supporting a variety of conservation missions.

“The advancement of pilotless aircraft over the past few decades is truly astonishing,” said Susan Marenoff-Zausner, president of the Intrepid Museum. “This exhibition showcases the far-reaching impact of drones on countless human endeavors—from wildlife conservation and space exploration to artistic expression and our daily lives. Drones: Is the Sky the Limit? gives visitors amazing insight into how far we have come and how this technology will shape the future.”

The Intrepid Museum will also offer related programs for students, educators and the general public that explore this growing technology and its controversial and ethical implications. Programs will incorporate lively dialogue, demonstrations of drones in flight, installations and social gaming.