Earl Dowell has been named chairman of the Department of Mechanical Engineering and Materials Sciences at Duke University’s Pratt School of Engineering. The announcement was made by Pratt Dean Tom Katsouleas.

Dowell, William Holland Hall Professor of Mechanical Engineering and Materials Science, had been serving as chair since 2010 when Tod Laursen left to become president of Khalifa University of Science, Technology and Research in the United Arab Emirates. Dowell’s new term runs through June, 2015. 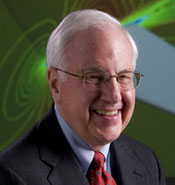 On Duke’s faculty for 29 years, Dowell is no stranger to engineering leadership, having served as engineering dean from 1983-1999.

“Over the past year and a half, Earl Dowell has provided superb leadership to the department, nurturing and supporting faculty and students, recruiting high-profile as well as promising young faculty and using his vast knowledge and experience to the advantage of MEMS, Pratt and Duke,” said Katsouleas. “Throughout this period, Earl's leadership has earned unanimous praise from faculty and staff alike.”

Dowell is best known for his research into aeroelasticity, a field for which he literally wrote the books, specifically the seminal research monograph, “Aeroelasticity of Plates and Shells” and with colleagues at Duke and other universities the textbook, “A Modern Course in Aeroelasticity.”

Dowell has won all the major honors in his field, including the Walter J. and Angelina H. Crichlow Trust Prize, the Spirit of St. Louis Medal, and the Daniel Guggenheim Medal. He is a member of the National Academy of Engineering and an Honorary Fellow of the American Institute of Aeronautics and Astronautics.