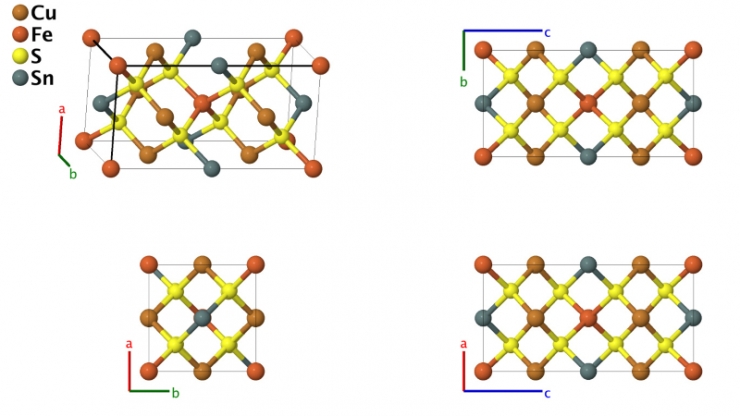 One example of the sorts of 3-D crystalline structures included in a relaunch of Crystal Lattice Structures, a venerable online cookbook for chemists

In response to popular demand, materials scientists at Duke University have resurrected an online cookbook of crystalline structures that started when the World Wide Web was Netscape Navigator and HTML 1.0.

In 1995, Michael Mehl, then a scientist at the U.S. Naval Research Laboratory, began collecting, cataloguing and sharing information about crystalline structures on a basic website for colleagues.

Researchers needed a reference catalogue to guide their efforts because crystals form hundreds of different structures in nature. Chemists use crystals as handy building blocks for new materials because of their rigid, ordered molecular shapes, which help determine a material's properties.

Mehl's website, called Crystal Lattice Structures, provided detailed information that, while available from other sources, was more useful to researchers unfamiliar with crystallographic conventions. If crystalline databases were cookbooks and each crystal structure a recipe, researchers had written other references suitable for accomplished French chefs with specialized training. Crystal Lattice Structures, on the other hand, was for your average home cook.

"The library showed how crystallography relates to crystals in the real world," explained Mehl, now at the United States Naval Academy. "It also gave a broad overview of structures seen experimentally, which is always a good place to start looking for something new."

Mehl took the website down in 2010, however, due in part to security upgrades made at NRL, and because the website's haphazard growth over 15 years had left its organization unnecessarily complicated and its entries un-standardized.

"There were a lot of people in the community asking where the database had gone and whether or not it could be brought back," said Stefano Curtarolo, professor of mechanical engineering and materials science at Duke. "We decided to put all the information together into a paper and also bring back the website in a more robust and open-source version."

With Mehl's help, Curtarolo and his team have resurrected Crystal Lattice Structures, launching a new and improved online catalogue and publishing a paper containing all of its data (the first of a longer collection). The paper appeared online on May 22 in Computational Materials Science.

The paper, which took more than a year to compile, contains 288 entries for various crystalline structures. Each entry contains data on the symmetry of the structure, its crystalline properties and the shape of a unit cell. It also contains generic mathematic equations describing each atom's placement, rather than providing that information in a specialized form as other databases typically do.

"Having the equations for the atomic placements written out gives more flexibility to include slight variations and to specifically tune each structure," said Cormac Toher, assistant research professor of mechanical engineering and materials science at Duke. "We're also going to have a 3D viewer of the structures at the top of each entry so that people can see the structures at different angles."

Making the new website even more robust, each entry is directly linked to the Duke Center for Materials Genomics AFLOW library—an online database of two- and three-element compounds that lets users predict the properties of yet-to-be-discovered materials. With the incorporation of the new database, users can simply choose which elemental atoms to place at which positions in any of the 288 crystalline structures, and the program will compute the resulting material's likely properties.

"We had to decide what format to present the information in, get all of the data, and 800 pages later, make sure there weren't any errors," said David Hicks, a graduate student in Curtarolo's laboratory. "And then implementing everything within AFLOW took another 288 files of C++ coding. It was a lot of work, but we think it will be a very useful resource for the community."