Brain Surgery May Get a Bit Easier, with Augmented Reality

Doctors do what it takes to save the lives of their patients -- even if it means drilling holes into their skulls and sticking giant needles into their brains.

Luckily for those of us with heads, surgeons and engineers at Duke are working to make emergency neurosurgical procedures like this a whole lot safer, with the help the HoloLens, a new pair of augmented reality (AR) goggles from Microsoft.

The HoloLens adds to, or “augments,” our existing reality by projecting virtual, 3D images onto real-world objects. The effect is just like spotting one of those colorful, virtual monsters from Pokemon Go -- except instead of seeing the virtual images in the screen of your phone, you see them through the lenses of the goggles.

The idea for HoloLens-aided brain surgery started with Duke neurosurgery residents Andrew Cutler and Shervin Rahimpour, who were searching for a way to help guide doctors during “blind” surgeries like extraventricular drain (EVD) placement.

EVD placement is a cringe-worthy, but often life-saving, procedure, designed to relieve pressure when excess fluid gathers in the brain. To perform EVD, a surgeon must quickly drill a hole through a patient’s skull and then stick a catheter – basically a thick, foot-long needle – into the precise spot where fluid has pooled. Doctors rarely have access to real-time brain imaging in these situations, instead relying on static CT scans and physical “landmarks” to place the needle.

These landmarks are usually pretty accurate, Cutler said. But not always.

“There are many times when the fluid space we are trying to target is too small or is shifted from a standard position, and these landmarks do not provide an accurate target for us.” Cutler said. “We wanted a fast and simple way to overlay a rebuilt CT scan onto a patient’s head.” 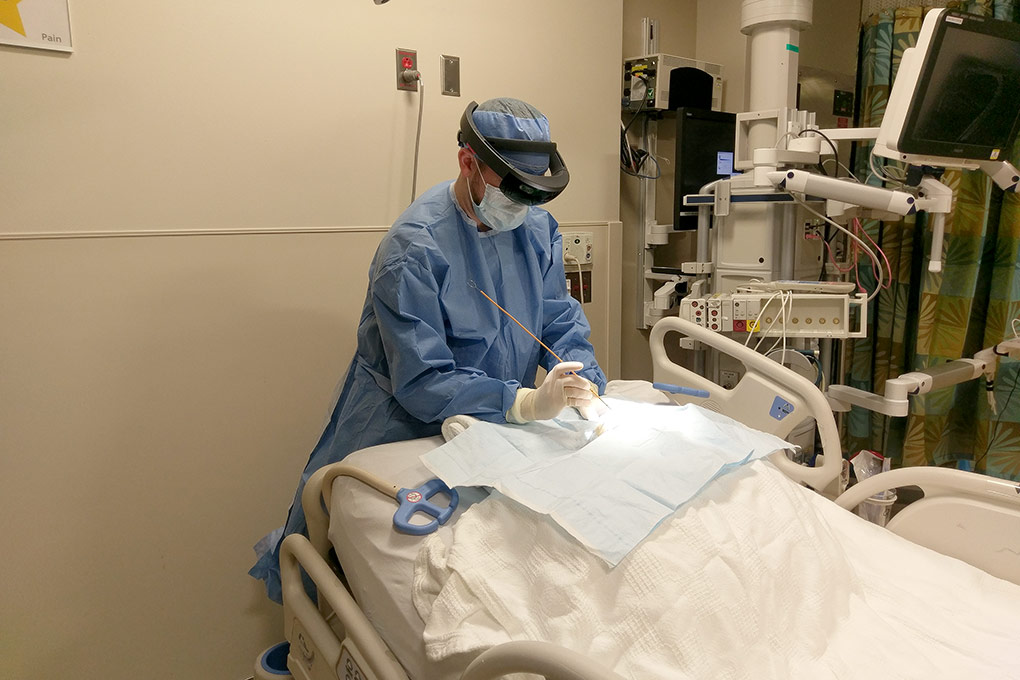 Cutler and Rahimpour are not the first to envision using augmented reality goggles to aid in surgery, Kopper said at a Learn IT @ Lunch event last month.  However, until now, these technologies have been plagued with issues like jitter, where the image shakes around, and latency, where movements of the images are delayed.

“If you are operating on someone’s ankle and the model shakes around, it is not going to help you so much,” Kopper said. “That is where HoloLens has made great improvements. It allows us to do work that we haven’t done before.”

In her simulation, Liu can place a three-dimensional image of a brain onto a head, and watch a virtual projection of the catheter as it pierces the brain.

For now, the only patient to receive the HoloLens-aided EVD surgery is a life-size grey plastic model of a head. But if the procedure is successful in clinical settings, Cutler and Rahimpour think the holograms could be a boon in a variety of other neurological surgeries.

“Since we can manipulate a hologram without actually touching anything, we have access to everything we need without breaking a sterile field,” Cutler said. “In the end, this is actually an improvement over the current OR system because the image is directly overlaid on the patient, without having to look to computer screens for aid.”