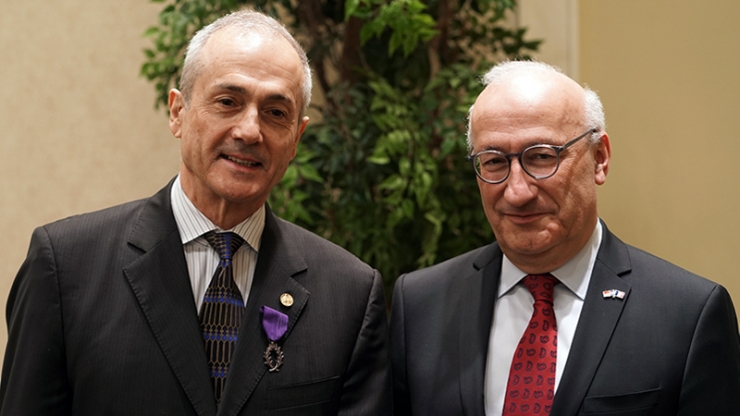 Adrian Bejan, the the J.A. Jones Distinguished Professor of Mechanical Engineering at Duke University, was presented with the insignia of Knight of the French Order of Academic Palms by Hon. Philippe Étienne, ambassador of France to the United States, on Thursday, February 20, 2020.

Known in its native tongue as L’Ordre des Palmes Académiques, the Order was established in 1808 by Emperor Napoleon I to honor accomplished members of the University of Paris. Its three ranks—knight, officer and commander—have since been extended to those who make major contributions to the expansion of French culture in France or the rest of the world.

“This order is one of the oldest and most prestigious honors presented to academics by the French government,” said Étienne in remarks at the ceremony. “Dr. Adrian Bejan, as we all know, you have been dedicating your life to science from your first year as a student at MIT. Your interdisciplinary pioneering contributions to modern thermodynamics as well as your discovery and development of the contructal law, which predicts the natural design of engineering, scientific and social systems, have made you one of the top 100 most cited authors worldwide in engineering. Because of the outstanding scientist and prolific writer that you are, this ceremony cannot possibly contain enough hours to mention the remarkable numbers of your publications and awards.”

“I am absolutely delighted to be here to celebrate one of our most eminent faculty members,” said Vincent Price, president of Duke University. “Adrian, I have to tell you I’m a bit jealous. Not many Blue Devils can call themselves knight. Congratulations, this is a wonderful achievement.”

Bejan is also a faculty member in the Duke Energy Initiative. His work in engineering science and applied physics spans thermodynamics, design and evolution. In 2019, he was ranked among the top 0.01 percent of leading world scientists based on impact of citations and among the top 10 of engineering scholars worldwide, according to a study published in PLOS Biology.

During his career, Bejan has authored more than 650 peer-refereed articles and 30 books. His newest book, “Freedom and Evolution,” explains how many familiar concepts have a foundation in physics and engineering.

“This is indeed a huge honor. I have the deepest respect for the contributions France has made to Europe, America and Western civilization as a whole,” said Bejan in accepting the honor. “The first modern engineering university was founded in Paris on the Left Bank in 1794. The first museum of science and technology was founded in Paris in the same year on the Right Bank.

“Most of the words, units of measure, and symbols of science originate in French. Science, as we teach and practice it today, was embraced by the whole world. France played a big part in creating this empowering knowledge, and this is why I feel at home among French ideas, books and colleagues. This is why I am so honored today.”