The Duke MEM professor's fourth book for a general audience, “Time and Beauty,” was published by World Scientific 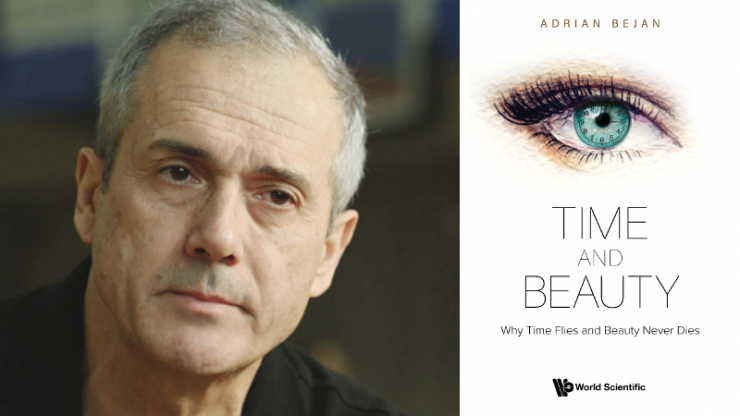 Adrian Bejan, the J.A. Jones Distinguished Professor of Mechanical Engineering at Duke University, has published a new book titled “Time and Beauty: Why Time Flies and Beauty Never Dies.” This is Bejan’s fourth book written for a general audience that uses his concept of constructal law — the tendency of all systems to evolve towards easier access to flow — to explain everyday phenomena that aren’t traditionally tied to physics. The book was published in early February 2022 by World Scientific.

Two of Bejan’s insights that have sparked the imagination of the public involve beauty and time. In 2010, he posited that the golden ratio, leveraged in works ranging from the Parthenon in Athens to the Mona Lisa, is so pleasing to people because it allows for the most efficient scan of a composition by the human eye. More recently in 2019, Bejan suggested a physical reason for why time seems to speed up as humans age — a slowdown in the rate at which eyes can obtain information and neural systems can process them.

“Lying in bed in the middle of the night not long ago, it occurred to me that these two ideas are actually one and the same,” Bejan said. “The ideas of beauty and time are usually thought of as abstract ideas that can’t be explained. But they both arise from the mechanics of how our eyes move. In other words, the way in which we perceive both time and beauty arises out of physics.”

In the new book, Bejan explores these two concepts in more detail, providing many visual examples to help the reader understand his explanations. Vision and cognition evolved together and are one and the same design, Bejan says. The increased efficiency of information flowing from the world through the eyes to the brain corresponds with the transmission of this information through the branching architecture of nerves and the brain. He then delves into his thoughts as to how this basic physical infrastructure influences the way humans see the world.

In the realm of beauty, Bejan argues that the world — whether it is a human looking at a painting or a gazelle on the open plain scanning the horizon — is basically oriented on the horizontal. For the gazelle, danger primarily comes from the sides or from behind, not from above or below, so their scope of vision evolved to go side-to-side. As vision developed, animals got “smarter” by seeing better, and he argues that the golden ratio is the peak of this evolutionary process.

When it comes to time, Bejan once again references the flow of information from the eyes through the branching pathways of our brains. As these tangled webs of nerves and neurons mature, they grow in size and complexity, and then begin to age and degrade. Combined with a slowing of our visual systems’ abilities to quickly scan the world, these phenomena cause the rate at which new mental images are acquired and processed to decrease with age.

This is evidenced by how often the eyes of infants move compared to adults, noted Bejan — because infants process images faster than adults, their eyes move more often, acquiring and integrating more information while awake. The result is that, because older people are viewing fewer new images in the same amount of actual time, it seems to them as though bedtime arrived too soon.

“This book highlights the extension of science over a domain that was previously relegated to the unknown or were subjects that were 100% descriptive,” Bejan says. “But with a new understanding of the underlying physics, we are now armed with the power to predict these aspects of the world.”

Speaking to the power of prediction, Bejan says he intends to use his new book in his classroom teachings at Duke. Anything that can help professionals predict better designs, he argues, is an important piece of education.

“I teach the science of design, and design that is not done by the seat of your pants,” Bejan said. “Design is a science with rules and discipline. We don’t want our students wandering in the dark, tinkering with their designs. We want them to graduate with the gift of how to predict the best designs, which will fast-forward their own thinking.”