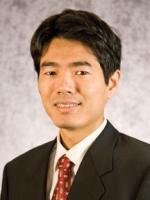 Consisting of a crosslinked network of both hydrophobic and hydrophilic groups, a temperature-sensitive gel may collapse by expelling a large amount of solvent when heated over the lower critical solution temperature. For smaller samples which undergo a slow temperature change, this phase transition is homogeneous and the resultant deformation is uniform. When superheated, a relatively large gel may develop heterogeneous structures by nucleating solvent-rich domains inside. A Ginzburg-Landau-type phase-field model is formulated to study the microstructure evolution in a phase-separating gel. Numerical calculations show that the phase-separated domains coarsen non-self-similarly and form a spongy structure with thin walls of the dryer phase. Theoretical model further confirms that such a structure the deformation in each phase is more uniform, as favored by the energy of mixing. Furthermore, it is found that the coarsening will give way to a domain dilation mechanism if the system is brought to a far-from-equilibrium state. The thermodynamic and kinetic processes revealed by the models may help in designing stimuli-responsive soft machines, and in understanding similar phenomena in natural and biological systems.