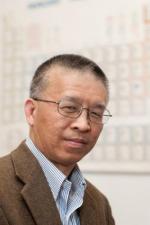 Dr. Gang Chen is currently the Carl Richard Soderberg Professor of Power Engineering at Massachusetts Institute of Technology. He obtained his Ph.D. degree from UC Berkeley in 1993 working under then Chancellor Chang-Lin Tien. He was a faculty member at Duke University (1993-1997), University of California at Los Angeles (1997-2001), before joining MIT in 2001. He is a recipient of the NSF Young Investigator Award, the ASME Heat Transfer Memorial Award, the R&D100 Award, and the MIT McDonald Award for Excellence in Mentoring and Advising. He is a member of the US National Academy of Engineering, a Guggenheim Fellow, an AAAS Fellow, an APS Fellow, and an ASME Fellow. He has published extensively in the area of nanoscale energy transport and conversion and nanoscale heat transfer. He is the director of Solid-State Solar-Thermal Energy Conversion Center funded by the US DOE’s Energy Frontier Research Centers program.

Understanding the transport of heat carriers at microscopic level leads to new ways to design better materials for thermal energy conversion and utilization. This talk will cover a few examples of extraordinary microscopic pictures of heat transport and show how to apply the new understanding to improve macroscale heat transfer and energy conversion materials and devices. After a brief introduction on the connection between nano and energy, the talk will demonstrates via both experiments and simulations that phonon mean free path in solids spans several orders of magnitude. This understanding is applied to engineer more efficient thermoelectric energy conversion materials and devices. In an opposite direction, the talk will discuss how to turn polymers from poor thermal conductors to highly thermally conductive materials. The talk will conclude by discussing theory and experimental results that show thermal radiation heat transfer at nanoscale can exceed the blackbody radiation by several orders of magnitude and the convergence of thermal radiation and heat conduction at nanoscale. Applications of these extraordinary heat transfer phenomena for energy applications will be discussed along the talk.