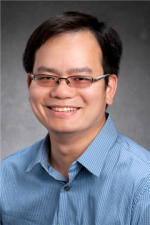 The advancement in computational capabilities and increasing accuracy of modeling tools are opening new opportunities to define the role of mechanics in non-traditional, interdisciplinary areas. In this talk, I will highlight two such examples in which multi-scale modeling and simulations have uncovered nanoscale mechanics principles which are guiding the design and development of novel materials with unprecedented properties.

My first example focuses on the mechanics of deformation in high-capacity lithium ion battery electrodes using silicon-based electrodes, which have order of magnitude higher charge carrying capacity than conventional graphite electrodes. The problem with silicon is that it cracks massively during repeated electrochemical cycles, and eventually delaminates from the current collector. I will discuss our use of multi-scale computational tools, spanning density functional theory, molecular dynamics, and meso-scale finite element simulations, to elucidate the underlying mechanisms of deformation, fracture, and failure of lithiated silicon electrode materials. The uncovered mechanisms have explained a number of intriguing experimental observations, including plasticity of these electrode materials, the cracking patterns in silicon thin film electrodes, and the abrupt capacity fade after a critical number of charge cycles. Understanding these mechanisms and their interrelationship with the atomic structure of the electrode material can provide insights for the design of novel fracture-resistant electrode materials to improve cycle life.

In my second example, I will discuss recent efforts to elucidate the nanomechanics of plasma-graphene interaction and their effects on nanoscale patterning of graphene. Hydrogen-plasma experiments have been shown to narrow graphene only from the edges, or to selectively produce circular or hexagonal holes in the basal plane of graphene, but the underlying plasma-graphene chemistry is unknown. Here, we model the hydrogen-plasma etching of monolayer graphene on SiO2 substrates using scale-bridging molecular dynamics simulations. We uncover distinct etching mechanisms, operative within narrow plasma ion energy windows, which fully explain the differing plasma-graphene reactions observed experimentally. Understanding the complex plasma-graphene chemistry opens up a means for controlled patterning of graphene nanostructures.

Dr. Huck Beng Chew received his PhD in 2007 under a President Graduate Fellowship from the National University of Singapore, where he focused on the micromechanics of fracture and failure of complex multilayered materials. He joined Brown University as a post-doc and subsequently research assistant professor, where his expanded his research interests to include atomistic modeling of materials, as well as inverse methods to describe atomistic observations at experimental length and time-scales. Chew joined the Aerospace Engineering Department at the University of Illinois at Urbana-Champaign in 2011 as an assistant professor, focusing on the nano and micromechanics of small-scale material structures using multi-scale computational simulations. His current research interests include the mechanics of interfaces in nanoscale materials, and the mechanics of deformation and failure in high-capacity lithium ion batteries. He has authored/coauthored over 20 papers in journals such as Nano Letters, Journal of the Mechanics and Physics of Solids, Philosophical Magazine, and the Royal Society Proceedings.