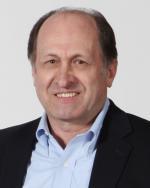 All Turbofans of the 21st century have employed wide chord fan blading. This technology was known in the 70’s to improve fan efficiency but was not fully implemented by Industry until the late century due to many factors. Execution of the fan as a system and how it is configured on an aircraft was needed along with a demand for the improvement this technology brings. At the same time, data on fan blade damage from bird ingestion was being accumulated and used by Industry and Regulators to implement changes to the current fan designs to improve flight safety. With continued improvements in materials, manufacturing, and design computational capabilities as well as aircraft integration, modern Turbofan engines are more efficient and much more robust that their predecessors.

Mr. Schilling joined GE Aviation in 1969 as part of the Technical Development Program after graduating with a BS degree in Mechanical Engineering from the Indiana Institute of Technology.  He also holds a MS degree in Aerospace Engineering from UC.  He held numerous engineering leadership roles within GE’s Engineering division.  Prior to becoming Chief Engineer, he led the technical team that brought the GE90-115B – the world’s most powerful engine – through the design, development and certification process.  Mr. Schilling served as Chief Engineer and General Manager for GE Aviation from 2003 to 2011 where he was responsible for ensuring the safety of all GE Aviation products, leading the technical integrity of the Engineering division and defining and driving Engineering process initiatives. He was Advanced Products Chief Engineer of GE Aviation until retirement in 2014. He is a member of the National Academy of Engineers.