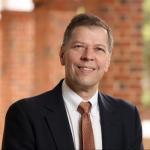 Unsteady fluid-structure Interaction are becoming more and more critical to engineering systems.  Advances in numerical schemes are discussed followed by a discussion of these interaction on wind turbines, where they are critical to design and cost of energy, especially in the category of extreme-scale wind turbines (≥ 10-MW). A new concept is proposed which employs a downwind rotor with blades whose elements are relatively stiff (no intentional flexibility) but with hub-joints that can be unlocked to allow for moment-free downwind alignment. Aligning the combination of gravitational, centrifugal, and thrust forces along the blade path reduces downwind cantilever loads, resulting in primarily tensile loading.  Aeroelastic analysis and unsteady simulations (e.g. at gust and off-design conditions) indicate this concept is feasible and may allow the world’s largest wind turbine.  The first gravo-aeroealstically scaled wind turbine is planned for field testing in Summer of 2018 at NREL to investigate the ultralight aspects of this concept.  However, there are many challenges regarding tower shadow, blade segmentation, morphing mechanics and levelized cost of energy reduction.

Professor Eric Loth is the Chair of Mechanical and Aerospace Engineering and serves as the Rolls-Royce Commonwealth Professor of Engineering.  He has received honors and awards from NASA and the National Science Foundation while also being named a Fellow of the American Society of Mechanical Engineers, of the American Institute of Aeronautics and Astronautics, of the National Center for Supercomputing Applications, and of Cambridge University.  Dr. Loth has given invited talks at Cambridge, Penn, Princeton, Oxford, Harvard, and MIT.  In 2017, his project team was invited to US Congress to discuss their new the $3.7M project on extreme-scale morphing wind turbines.  This ambitious project has received coverage in NBC, Scientific American, Popular Science, Yahoo and MIT Technology Review. Professor Loth received his B.S. ​Aerospace Engineering from West Virginia University, his M.S. Aerospace Engineering from Pennsylvania State University, and his Ph.D. ​Aerospace Engineering from University of Michigan.