MEMS Seminar: Effect of Crystal Packing on the Electronic Properties of Molecular Crystals 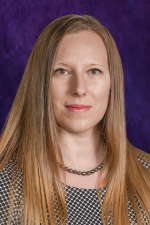 Molecular crystals have applications in nonlinear optics, organic electronics, and particularly in pharmaceuticals, as most drugs are marketed in the form of crystals of the pharmaceutically active ingredient. Molecular crystals are bound by dispersion (van der Waals) interactions, whose weak nature generates potential energy landscapes with many local minima that may be extremely close in energy. This often results in polymorphism, the crystallization of the same molecule in several different structures. Crystal structure may profoundly influence the physical and chemical properties, including the electronic and optical properties relevant for device applications.

We perform large scale quantum mechanical simulations to predict the structure of molecular crystals and investigate the effect of crystal packing on their electronic and optical properties. The massively parallel genetic algorithm (GA) package, GAtor, relies on the evolutionary principle of survival of the fittest to find low-energy crystal structures of a given molecule. Dispersion-inclusive density functional theory (DFT) is used for structural relaxation and accurate energy evaluations. Evolutionary niching is performed by using machine learning to perform clustering on the fly. The structure generation package, Genarris, performs fast screening of randomly generated structures with a Harris approximation, whereby the molecular crystal density is constructed by replicating the single molecule density, which is calculated only once. Many-body perturbation theory, within the GW approximation and the Bethe-Salpeter equation (BSE), is then employed to describe properties derived from charged and neutral excitations.

An emerging application of molecular crystals is singlet fission (SF), the down-conversion of one photogenerated singlet exciton into two triplet excitons. SF has the potential to significantly increase the efficiency of organic photovoltaics beyond the Shockley-Queisser limit by harvesting two charge carriers from one photon. However, the realization of SF-based solar cells is hindered by the dearth of suitable materials. We aim to discover new SF materials and optimize the crystal packing of known materials to enhance SF efficiency. We predict that crystalline quaterrylene and a lesser known monoclinic crystal structure of rubrene may exhibit high singlet fission efficiency, possibly rivaling that of the quintessential SF material, pentacene. Quaterrylene has the additional advantages of high stability, a narrow band gap, and a triplet energy in the optimal range to maximize photoconversion efficiency.

Noa Marom received a B.A. in Physics and a B.S. in Materials Engineering, both Cum Laude, from the Technion- Israel Institute of Technology in 2003. From 2002 to 2004 she worked as an Application Engineer in the Process Development and Control Division of Applied Materials. In 2010 she received a Ph.D. in Chemistry from the Weizmann Institute of Science. She was awarded the Shimon Reich Memorial Prize of Excellence for her thesis. She then pursued postdoctoral research at the Institute for Computational Engineering and Sciences (ICES) at the University of Texas at Austin. From 2013 to 2016 she was an Assistant Professor in the Physics and Engineering Physics (PEP) Department at Tulane University. In 2016 she joined the Materials Science and Engineering Department at Carnegie Mellon University as an Assistant Professor. She holds  courtesy appointments in the Department of Chemistry and the Department of Physics. She is a member of the Pittsburgh Quantum Institute (PQI) and an affiliate of the Scott Institute for Energy Innovation. She has recently received the NSF CAREER, DOE INCITE, and Charles E. Kaufman Young Investigator awards.