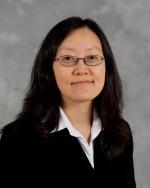 We are interested in developing and using a set of automation, microfluidics, and image-based data mining technologies to address questions in quantitative biology. In one example, I will show how we take advantage of simple hydrodynamics to design microfluidic systems for large throughput and spatially and temporally well-controlled experiments in Drosophila embryonic development as well as in immunology. In another example, I will show how we combine the power of experimental tools and computational tools to study problems in development neurobiology and behavior in C. elegans.  The power of these engineered systems lies in that the throughput that can be achieved by using automation and microfluidics is 100-1,000 times that of conventional methods; furthermore, we can obtain information unattainable by conventional tools and “invisible” to human vision to discover new genes and gene functions.

Hang Lu is the Love Family Professor in the School of Chemical and Biomolecular Engineering at Georgia Tech.  She graduated summa cum laude from the University of Illinois at Urbana-Champaign in 1998 with a B.S. in Chemical Engineering.  She has a Master’s degree in Chemical Engineering Practice from MIT (2000).  She obtained her Ph.D. in Chemical Engineering in 2003 from MIT working with Dr. Klavs F. Jensen (Chemical Engineering) and Dr. Martin A. Schmidt (Electrical Engineering and Computer Sciences) on microfabricated devices for cellular and subcellular analysis for the study of programmed cell death.  Between 2003 and 2005, she pursued a postdoctoral fellowship with neurogeneticist Dr. Cornelia I. Bargmann (Howard Hughes Medical Institute investigator, Kavli Prize in Neuroscience 2012) at University of California San Francisco and later at the Rockefeller University on the neural basis of behavior in the nematode C. elegans.  Her current research interests are microfluidics, automation, quantitative analyses, and their applications in neurobiology, cell biology, cancer, and biotechnology.  Her award and honors include the ACS Analytical Chemistry Young Innovator Award, a National Science Foundation CAREER award, an Alfred P. Sloan Foundation Research Fellowship, a DuPont Young Professor Award, a DARPA Young Faculty Award, Council of Systems Biology in Boston (CSB2) Prize in Systems Biology, Georgia Tech Junior Faculty Teaching Excellence Award, and Georgia Tech Outstanding PhD Thesis Advisor Award; she was also named an MIT Technology Review TR35 top innovator, and invited to give the Rensselaer Polytechnic Institute Van Ness Award Lectures in 2011, and the Saville Lecture at Princeton in 2013.  She is an elected fellow of American Association for the Advancement of Science (AAAS) and an elected fellow of the American Institute for Medical and Biological Engineering (AIMBE).