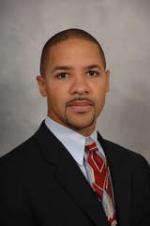 The Hall effect thruster (HET) is a type of electric propulsion that has a high thrust density.  HETs are routinely flown on geosynchronous spacecraft.  Currently, HET development requires expensive, high-risk, ground-based qualification tests that exceed 7,000 hours to demonstrate the necessary on-orbit lifetime.  To date, modeling efforts have been unable to predict the dominant failure mechanism observed in HET qualification tests.  In particular, how quickly is the ceramic HET discharge channel eroded by the accelerated plasma?

In response to this issue, the Air Force Office of Scientific Research (AFOSR) has initiated a research program to study plasma-wall interactions.  This presentation discusses an AFOSR-sponsored effort to develop a fundamental understanding of how the HET discharge plasma erodes the boron-nitride discharge channel.  This knowledge will facilitate our ability to predict HET lifetime and will influence the design of future high-power HETs.

Mitchell L. R. Walker is a Professor of Aerospace Engineering at the Georgia Institute of Technology where he directs the High-Power Electric Propulsion Laboratory. His primary research interests include both experimental and theoretical studies of advanced plasma propulsion concepts for spacecraft and fundamental plasma physics. Dr. Walker received his Ph.D. in Aerospace Engineering from the University of Michigan, where he specialized in experimental plasma physics and advanced space propulsion. His training includes rotations at Lockheed Martin and NASA Glenn Research Center. In 2005, he founded the electric propulsion program at the Georgia Institute of Technology. Dr. Walker’s research activities include Hall effect thrusters, gridded ion engines, magnetoplasmadynamic thrusters, diagnostics for plasma interrogation and thruster characterization, vacuum facility effects, helicon plasma sources, plasma-material interactions, and electron emission from carbon nanotubes.  He has authored more than 100 journal articles and conference papers in the fields of electric propulsion and plasma physics.

Dr. Walker has served as an Associate Editor of the American Institute of Aeronautics and Astronautics (AIAA) and on the Editorial Board of Frontiers in Physics and Astronomy and Space Sciences – Plasma Physics since 2015. He is an Associate Fellow of the AIAA and serves as the Chair of the AIAA Electric Propulsion Technical Committee. He was a participant in the 2014 US National Academy of Engineering US Frontiers of Engineering Symposium and in 2015 he was the co-organizer for a focus session at the symposium. Dr. Walker is also a recipient of the AIAA Lawrence Sperry Award (2010), the Air Force Office of Scientific Research Young Investigator Program Award (2006), and a NASA Faculty Fellow Award (2005).  Light refreshments will be served at 2:30 pm.