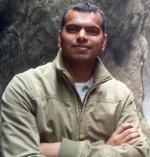 To impose the nonzero boundary conditions, we construct fractional harmonic extensions of the boundary data. It is shown that solving for the fractional harmonic extension is equivalent to solving for the standard harmonic extension in the very-weak form. The latter result is of independent interest as well. The remaining fractional elliptic problem (with homogeneous boundary data) can be realized using the existing techniques. We introduce finite element discretizations and derive discretization error estimates in natural norms, which are confirmed by numerical experiments. We also apply our characterizations to Dirichlet and Neumann  boundary optimal control problems with fractional elliptic equation as constraints.

H. Antil got his PhD. in 2009 at University of Houston. After spending a year at Rice University, he continued his work at University of Maryland. He joined George Mason University in 2012 as an assistant professor. His research interests include: PDE Constrained Optimization (optimal control, shape optimization), free boundary problems, nonlocal PDEs, and model order reduction.