MEMS Seminar: How Did Humans Come to be on Planet Earth and Where to Next? 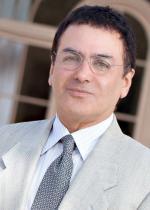 This is a multi-disciplinary talk that traces our cosmic roots to present and discusses where we, or our robotic emissaries, will be headed next and the exponential technology that will disrupt our future -- for better and worse.

Dr. Naderi is the former Director for Solar System Exploration at NASA’s JPL where he spent more than 30 years in various technical and senior executive positions.  Best known for his leadership of the Mars exploration program, he has contributed to some of the most iconic NASA robotic missions to various corners of solar system.  Dr. Naderi, who received his Ph.D. from University of Southern California, has been honored multiple times including the Ellis Island Medal of Honor, Technology Hall Fame Medal, NASA’s outstanding leadership medal as well as NASA’s highest award – the Distinguished Service medal. For his contributions to the American Space Program he was elected a “Fellow” of the American Institute of Aeronautic and Astronautic (AIAA). In March 2016, Asteroid 1989 EL1 was renamed Asteroid “Naderi 5115” for his career contributions to space science and exploration.

He is frequently invited as keynote & motivational speaker at conferences and workshops. He has given talks to student associations in universities including Oxford, Stanford, Berkeley, MIT, UCLA, USC, Duke University, University of Toronto, Virginia Tech, University of British Columbia, University of California San Diego, Texas A&M University, University of Houston and more.  Over the last five years, he has taught modules in executive education classes at Stanford on “Management of Large Complex Programs”