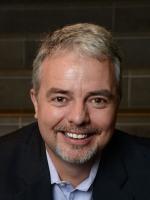 Acoustic waves have found new utility in microfluidics, providing an enormously powerful ability to manipulate fluids and suspended particles in open and closed fluid systems. In this talk, we cover some fundamental and powerful concepts of acoustic wave generation and propagation often overlooked in the literature, and follow it with exploration of new phenomena observed at the nanoscale. In fact, the usefulness of acoustic waves at the micro-scale is even more compelling at the nano-scale, in ways not predicted by classical theory. Particle deagglomeration, fluid pumping, pattern formation, and other curious physical phenomena will be shown in the context of potentially useful applications. Along the way, the fascinating underlying physics tying together the acoustics, fluid dynamics, and free fluid interface in these systems will be described.

James Friend is a Professor in the Center for Medical Devices and Instrumentation, Department of Mechanical and Aerospace Engineering, at the University of California, San Diego, having received his PhD in mechanical engineering from the University of Missouri-Rolla in 1998. His research interests are diverse, but principally lie in exploring and exploiting acoustic and vibration phenomena at small scales. He has over 260 peer-reviewed research publications, including 136 journal papers and eight book chapters, and 25 patents in process or granted, completed 32 postgraduate students and supervised 18 postdoctoral staff, and been awarded over $25 million in competitive grant-based research funding over his career. He has been fortunate to receive an AIAA Jefferson Goblet Student Paper Award and an ASME Best Paper of Conference Award for a single talk at the AIAA/ASME/AHS/ASC/ASCE Structural Dynamics & Mechanics Conference in 1996; excellence in teaching, early career research, and research awards from the Monash Faculty of Engineering in 2006, 2008, and 2011, respectively; a Future Leader award from the Davos Future Summit in 2008; a Top 10 emerging scientific leader of Australia by Microsoft and The Australian newspaper award in 2009; an award as the corresponding author of one of the top 50 papers of the past 50 years of Applied Physics Letters in 2012; and the IEEE Carl Hellmuth Hertz Ultrasonics Award from the IEEE in 2015.