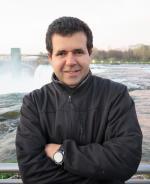 Thermoelectric materials convert heat into electricity or vice versa through a solid-state process. For the conversion efficiency to be competitive with fluid-based technologies, a thermoelectric material must be a good insulator of heat while, simultaneously, exhibit good electrical properties‒a combination that is hard to find in common materials. Here we present the concept of a locally resonant nanophononic metamaterial (NPM) [1-3] to overcome this natural properties trade-off. One realization of an NPM is a freestanding silicon membrane (thin film) with a periodic array of nanoscale pillars erected on one or both free surfaces. Heat is transported along the membrane portion of this nanostructured material as a succession of propagating vibrational waves, phonons. The atoms making up the minuscule pillars on their part generate stationary vibrational waves, which we describe as vibrons. These two types of waves linearly interact causing a mode coupling for each pair which appears as an avoided crossing in the pillared membrane’s phonon band structure. This in turn (1) enables the generation of new modes localized in the nanopillar portion(s) and (2) reduces the base membrane phonon group velocities around the coupling regions. These two effects in tandem cause a reduction in the in-plane thermal conductivity of the underlying membrane. Given that the number of vibrons scales with the number of degrees of freedom of a nanopillar, this effect intensifies as the size of the nanopillar(s) increases, and in principle may be tuned to influence the entire phonon spectrum (which for silicon extends up to over 17 THz). This novel phenomenon thus provides an opportunity for achieving exceptionally strong reductions in the thermal conductivity. Furthermore, since the mechanisms concerned with the generation and carrying of electrical charge are practically independent of the phonon-vibron couplings, the Seebeck coefficient and the electrical conductivity are at most only mildly affected, if not at all. In this talk, I will introduce the concept of an NPM and present thermal conductivity predictions using lattice-dynamics-based calculations and molecular dynamics simulations as well as preliminary electrical properties predictions using density functional theory. In conclusion, projections of record-breaking values of the thermoelectric energy conversion figure of merit ZT will be provided.

Dr. Hussein’s research focuses on the dynamics of materials and structures, especially phononic crystals and locally resonant phononic metamaterials, at both the continuum and atomistic scales. His approach to phononics is rather broad ranging from vibrations of aerospace structures to lattice dynamics and thermal transport in silicon-based nanostructured materials. His studies are concerned with physical phenomena governing these systems, relevant theoretical and computational treatments, and analysis of the effects of dispersion, resonance, dissipation and nonlinearity. Recently he has also been conducting experiments to support portions of the theoretical work. In 2011 and 2013, respectively, he received a DARPA Young Faculty Award and an NSF CAREER award. Dr. Hussein has served as guest editor for five special journal issues on phononic materials and structures, and is currently an associate editor for the ASME Journal of Vibration and Acoustics. He has co-edited a book and authored or co-authored 7 book chapters and over 30 papers in archival journals, and since 2006 has co-chaired over 15 symposia on “phononic crystals and acoustic metamaterials” at ASME and/or USNCM conferences. He co-established the Phononics 20xx conference series which is widely viewed as the world’s premier event in the emerging field of phononics.