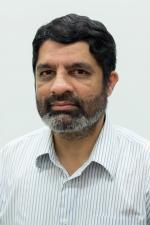 The current state-of-the-art for large-scale quantum-mechanical simulations is the planewave (PW) pseudopotential method, as implemented in codes such as VASP,  ABINIT, and many others.  However, since the PW method uses a global Fourier basis, with strictly uniform resolution at all points in space, it suffers from substantial inefficiencies in calculations involving atoms with localized states,  such as first-row and transition-metal atoms, and requires significant nonlocal communications that compromises parallel efficiency. Real-space methods such as finite-differences and finite-elements have partially addressed both resolution and parallel-communications problems, but have been plagued by one key disadvantage relative to PW: excessive number of degrees of freedom (basis functions) needed to achieve the required 1 mHa (chemical) accuracy in total energy. In this talk, I will present a real-space partition of unity finite element (PUFE) approach to solve the Kohn-Sham equations (coupled Schrodinger and Poisson equations) of density functional theory. In the PUFE method, we build the known atomic physics into the solution process to solve the Schrodinger eigenproblem using partition-of-unity enrichment techniques in finite element analysis. The method developed herein is completely general, applicable to any crystal symmetry and to both metals and insulators alike.  Total energy calculations for full self-consistent Kohn-Sham calculations will be presented for LiH that has light atoms, as well as triclinic CeAl (f-electron system), which requires large numbers of atomic-orbital enrichments.  The new PUFE approach attains the required accuracies with substantially fewer degrees of freedom, typically by an order of magnitude or more, than the PW method.  We compute the equation of state of LiH and show that the computed lattice constant and bulk modulus are in excellent agreement with reference PW results, while requiring an order of magnitude fewer degrees of freedom to attain. This is joint-work with John Pask, Physicist at LLNL.

Sukumar holds a B.Tech. from IIT Bombay in 1989, a M.S. from Oregon Graduate Institute in 1992, and a Ph.D. in Theoretical and Applied Mechanics from Northwestern University in 1998.  He held post-doctoral appointments at Northwestern and Princeton University, before joining UC Davis in 2001, where he is currently a Professor in Civil and Environmental Engineering.  Sukumar is a Regional Editor of International Journal of Fracture and is a member of the Executive Council of the USACM. He has spent sabbatical visits at Cornell University (2007) and SLAC National Accelerator Laboratory (2011).  Sukumar's research focuses on smooth maximum-entropy approximation schemes, novel discretizations on polytopal meshes, fracture modeling with extended finite element methods, and new methods development (partition-of-unity finite elements) for large-scale quantum-mechanical materials calculations.