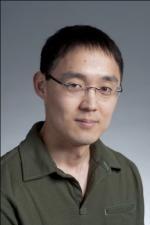 I will present a new computational approach that couples a recently developed potential energy surface exploration technique with applied mechanical loading to study the deformation of atomistic systems at strain rates that are much slower, i.e. experimentally-relevant, as compared to classical molecular dynamics simulations, and at time scales on the order of seconds or longer.  I will highlight the capabilities of the new approach via two distinct examples:  (1) Providing new insights into the plasticity of amorphous solids, with a particular emphasis on how the shear transformation zone characteristics, which are the amorphous analog to dislocations in crystalline solids, undergo a transition that is strain-rate and temperature-dependent.  (2) Uncovering new, mechanical force-induced unfolding pathways for the protein ubiquitin, while also discussing potential differences with experimental data regarding whether ubiquitin unfolds via an intermediate configuration.

Harold Park is an Associate Professor of Mechanical Engineering at Boston University. He received his BS, MS and PhD in Mechanical Engineering from Northwestern University in 1999, 2001 and 2004, respectively.  He was a postdoctoral researcher at Sandia Labs (California) from 2004-2005.  He held tenure-track positions at Vanderbilt University (2005-2007) and the University of Colorado (2007-2009) before moving to Boston University in 2010.  His research has generally focused on the mechanics of nanostructures, coupled physics phenomena at nano and continuum length scales, and the mechanics of soft, active materials.