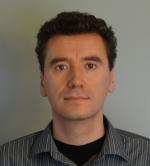 Evolutionary search, particle swarm optimization, and other recently introduced structure prediction methods have shown great promise for accelerating materials discovery. We have employed a combination of high-throughput screening, targeted evolutionary search [1], and rational design to systematically examine over 12,000 metal-boron compounds [2]. This largest ab initio scan of the complex materials class has uncovered dozens of new exotic materials, some of which have already been synthesized in joint experiments [3-5]. In particular, the proposed and confirmed FeB4 compound with a previously unknown crystal structure appears to be the first superconductor developed fully in silico [5-7]. I will describe our on-going work on the development of neural network-based interatomic models that have sped up structure searches by orders of magnitude.

The following postdoctoral work on the development of new materials from first principles was done in Departments of Materials, at Duke University (2004-2007) and the University of Oxford (2007-2008). In 2008, Dr. Kolmogorov was awarded a 5-year EPSRC Career Acceleration Fellowship in the UK. As a Senior Research Fellow at the University of Oxford, he led the research on the high-throughput identification of novel materials for superconductivity and hydrogen storage applications.

In 2012 Dr. Kolmogorov joined the Department of Physics at Binghamton University, SUNY as an Assistant Professor and has expanded his research to the development of catalysts and topological insulators. A major part of his research is dedicated to the adaptation of bio-inspired methods, such as evolutionary algorithms and neural networks, to Condensed Matter Physics problems. This work has been supported by the NSF (Award DMR-1410514).